Auckland, Nov 24: With the international cricket schedule having one ICC event in almost every year, there is less time for the teams to brush off the mistakes from the past events and prepare for upcoming competition with renewed approach. 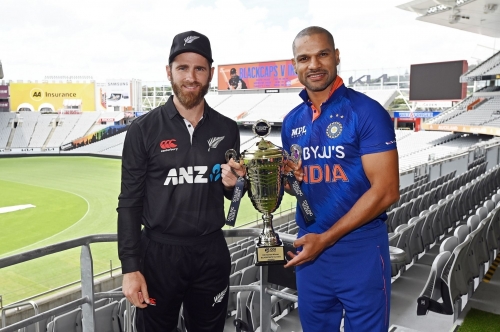 In this cycle of non-stop cricket at the international level, India and New Zealand will realise that they need to move on from their respective semifinal exits in the T20 World Cup and build-up to the ODI World Cup which is now less than 12 months away.

With India all set to host the mega event next year, their three-match series against New Zealand, starting from Friday at the Eden Park in Auckland, will be the formal commencement of the path to finalising their squad for the same.

India, ranked third in the Men's ODI rankings, have achieved automatic qualification for the World Cup next year by virtue of being hosts. It has been a year where their first-choice players like Rohit Sharma, Virat Kohli, KL Rahul, Hardik Pandya, Ravindra Jadeja, and Jasprit Bumrah haven't been consistent starters in the ODI series, largely due to the hectic cricketing schedule.

But such has been the riches of Indian cricket in recent years that despite missing the main players since middle of the year in 50-over matches, they have managed to win series in West Indies (3-0), Zimbabwe (3-0) and more recently, against a full-strength South Africa at home (2-1) in October.

Left-handed opener Shikhar Dhawan will be taking over the captaincy mantle yet again and, in all probability, will open the innings with Shubman Gill. The duo have amassed three century stands in eight ODIs this year and would be hoping to push their cases with sparking performances in the matches against New Zealand.

Suryakumar Yadav would be aiming to carry his superlative T20I form and 360-degree strokeplay into ODIs while Rishabh Pant, Shreyas Iyer, Sanju Samson and Deepak Hooda would form the middle-order. Hooda can also be the handy sixth bowling option, something which India have missed of late, and can form the spin attack which is a three-way battle between Washington Sundar, Kuldeep Yadav and Yuzvendra Chahal.

In the pace bowling department, Deepak Chahar, Mohammed Siraj, and Shardul Thakur could be tipped to form the bowling attack. But there is a chance for Arshdeep Singh, India's find in T20Is this year, to be given a debut ODI cap, and the same goes for Umran Malik too.

New Zealand, on the other hand, will be hoping that their talismanic skipper Kane Williamson comes into his best self in ODIs. Williamson has struggled to get the desired acceleration in T20Is. But with his ability to spend a lot of time in the middle, he can use that to his advantage and get big scores in ODIs.

In batting, New Zealand will be boosted by the return of Tom Latham, who will take keeping gloves from Devon Conway and also, of pacer Matt Henry in the fast-bowling department. With India and New Zealand having firepower in the batting scene, it could come down to whose bowling attack performs better as the two teams kickstart their road to preparing and spotting their best personnel for the 2023 ODI World Cup.