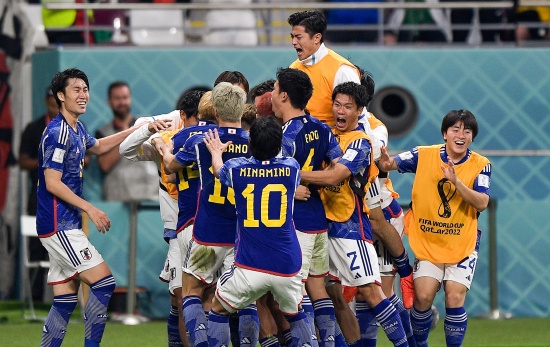 The Asian giants, co-host of the 2002 World Cup, came from behind to beat their famed European rivals and pull off the second shock of the tournament for the second successive day.

On Tuesday, two-time champions Argentina had succumbed to an identical 2-1 loss against Saudi Arabia, who are popularly known as the Green Falcons.

Incidentally, in Tuesday's match Argentina had started the goal scoring in the first half through a penalty and on Wednesday, Germany also led through Ilkay Gundogan's 33rd-minute penalty but the Samurai Blue struck two late goals through Ritsu Doan in the 75th and Asano to register their first win in 26 meetings against the former winners, for whom the last title came in 2014.

Japan, who have set a target of qualifying for the last-eight stage of the tournament, were forced to play second fiddle to their more renowned opponents but bounced back in the second half with vigour to pierce through the heart of the German defense.

Coach Hajime Moriyasu has some bitter memories of Qatar, as a player as he was part of the Japan team which missed out on the chance to qualify for the 1994 World Cup finals as they were within seconds of reaching their first finals only to concede a stoppage-time equalizer to Iraq which sent arch-rivals South Korea through instead.

That crushing moment is known as the "Agony of Doha" but while Japan's biggest football setback may never be forgotten, the Samurai Blue are determined to reverse their fortunes and make Qatar the stage for their best World Cup performance.

Japan have since then put the 1994 set behind them and since debuting in 1998 have qualified for seven successive World Cup tournaments and a last-eight finish is finally within Japan's reach despite featuring in a tough group feels Moriyasu, which he has reiterated time-to-time ahead of their opening match.

Wednesday's shock win has since given Moriyasu last-eight target a big boost, with the master tactician playing his cards well in the high voltage match. His changes at half-time and during the second half turned the game around.

Going into the match Japan players had decent knowledge of German players as eight of them are based in the German Bundesliga but do not take anything away from Japan players.

Incidentally, both scorers play in the German Bundesliga, at Freiburg and Bochum respectively, and it was also the first time Japan came back from a 1-0 deficit in a World Cup game to win their match.

Germany on their part lost a World Cup match after a half-time lead for the first time since 1978, against Austria.

Japan were the first to have a close look at the rival when Daizen Maeda scored but was pulled and thereafter Nico Schlotterbeck lost possession but the Germans were lucky that nothing came out of it.

After the two early surges, the Germans took control over the proceedings, with talented teenager Jamal Musiala calling the shots.

It was not long before, the Germans tasted success on the goal front.

A move initiated by Joshua Kimmich saw unmarked David Raum in the clear who was brought down by goalkeeper Shuichi Gonda. Of the resultant spot kick Gundogan converted from the spot by sending the keeper the wrong way.

Thereafter Kai Havertz goal at the stroke of half-time was ruled offside and Gundogan effort hit the outside right post on the hour.

The Germans had so much control in the first half and one couldn't see them losing this game after 60 minutes' but everything changed in a few minutes' time into the second half, thanks in a large measure to coach Moriyasu. The changed tactics worked as Japan became more pronounced in the German half.

But Germany had their chances to take the game away from Japan but it was not to be, as in the 70th minute as keeper Gonda rose to the occasion to deny substitute Jonas Hofmann and thereafter Serge Gnabry on two occasions.

At the other end Gonda's opposite number Manuel Neuer denied Junya Ito and of the subsequent rebound Hiroki Sakai firing over the bar.

Then came the decisive striker, you may question the Germany defense, but it was a great first touch and finish from the Japan substitute. He took up a long ball, and with Schlotterbeck not challenging him decisively, he fired high into the net at the near post from a tight angle.

Germany threw everything at them in the end, Manuel Neuer even came close to heading in, but they quietly trudged off down the tunnel.

The 2014 winners lost their 2018 opener 1-0 against Mexico and went on to exit the group stage as title holders and will now face stiff competition to make it to the next stage from the group which also consists of Spain and Costa Rica,

Coach Hansi Flick has got real work on his hands now to get out of this group while Japan are in a wonderful position.