New Delhi, Nov 23: Deputy Chief Minister of Delhi, Manish Sisodia, claimed on Wednesday that in the past 15 years, BJP has converted Delhi into a dumpyard. 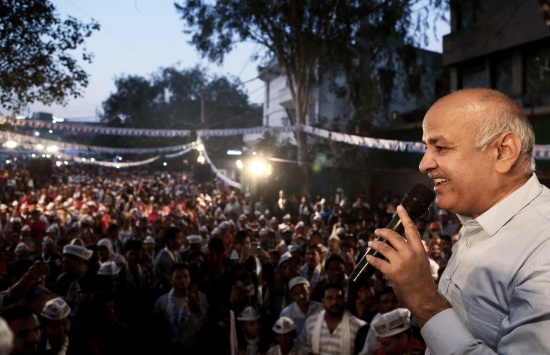 "Cleanliness in Delhi is the core responsibility of MCD, but the BJP failed miserably in managing it. Instead, it gave three garbage mountains to the national capital," Sisodia said while campaigning for the December 4 elections to the Municipal Corporation of Delhi (MCD).

Interacting with the people, Sisodia said, "(Arvind) Kejriwal's government will come to power in MCD too, and all his councillors will work for the public interest. If the wards have Kejriwal's councillors, they will focus on cleanliness and sanitation, whereas if a BJP councillor is elected, he will only focus on stalling the development works."

If elected, the BJP councillors' main agenda would be to fight with Kejriwal, Sisodia said.

"The condition of MCD schools and hospitals has deteriorated in the past 15 years, leaving people frustrated. They are now saying if Arvind Kejriwal can make government schools and hospitals world-class in just five years, provide free electricity and free pilgrimage to the elderly, why didn't the BJP do anything in the past 15 years while it was in power in the MCD," Sisodia said.

"It is a shame that the BJP has turned the national capital into a dumpyard due to its failure to manage garbage. It seems the Municipal Corporation of Delhi was virtually non-existent. Now it is time for people to vote AAP into power in the MCD and throw out the BJP as it has done nothing in the past 15 years," he said.