Zelensky accuses Russia of crimes against humanity in UN speech

Kiev, Nov 24: In his address to the UN Security Council, Ukrainian President Volodymyr Zelensky has accused Russia of committing crimes against humanity after a new barrage of missile strikes have caused widespread power outages across the war-torn nation. 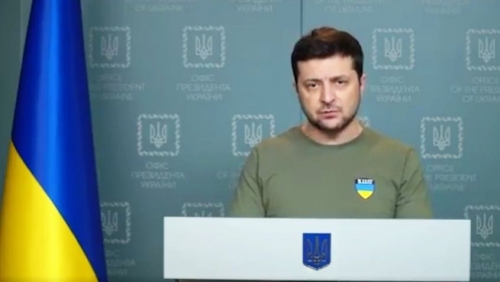 "Russia has long been trying to turn the UN Security Council into a platform for rhetoric. But it was created as the world's most powerful platform for decisions and actions. Therefore, the Security Council must give a clear assessment of the actions of the terrorist state," he told the UN body in a video address on Wednesday.

"Ukraine proposes that the Security Council adopt such a resolution condemning all forms of energy terror. I confirm the invitation from Ukraine regarding the mission of UN experts to critical infrastructure facilities of our country that have been or may be hit by Russian missiles.

"It is necessary to give a proper assessment of damage and destruction. It should be stated that these are strikes against the very infrastructure that ensures the lives of tens of millions of people.

"The world should not be held hostage by one international terrorist," the President added.

The recent Russian attacks have damaged almost half of Ukraine's energy system and millions of people are without power as temperatures drop for winter.

Blackouts, both scheduled and unscheduled, have become common in many parts of Ukraine, as Russia aims regular waves of missile attacks at parts of the energy infrastructure.

According to the President, at least seven people were killed and more than 20 million others were left without electricity on November 8 when Russia carried out over a 100 missile strikes in what is believed to be Moscow's biggest wave of missile strikes since the invasion began on February 24.

As a result, nuclear power plants in the country also went off-line.

Later in his nightly video address to the nation, Zelenksy said that due to the missile strikes which even continued on Wednesday, the situation in Kiev remained "very difficult" and efforts would continue through the night to restore electricity.

Zelensky accuses Russia of 'crimes against humanity' in UN speech