Guwahati, Nov 24: As Assam is celebrating the year-long varied events on the occasion of the 400th birth anniversary of Lachit Borphukan, the great Ahom General who had inflicted the most crushing defeat on the mighty Mughals, a new book throws light on how Assam had fought relentlessly against Muslim invasions for close to five decades. 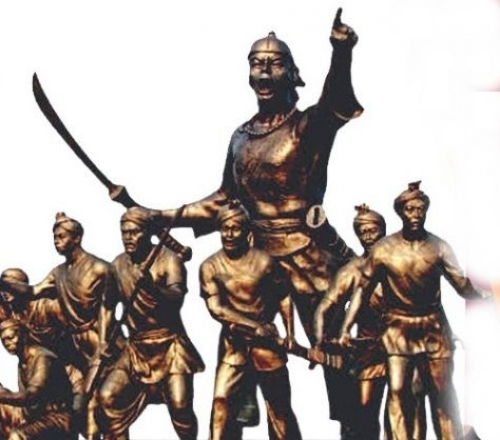 While the Assam government has made it a point to take the Lachit Borphukan story across the country, Prime Minister Narendra Modi will inaugurate the celebration in New Delhi on Friday.

Lachit Borphukan, it may be recalled, had defeated the Mughal army in the Battle of Saraighat, one that took place on the Brahmaputra in March 1671.

Such was the defeat that it also signalled the beginning of the Mughal empire's gradual collapse.

"Unfortunately, the Lachit Borphukan story has largely remained untold to the rest of India. His 400th birth anniversary thus has come as an opportunity to project the heroism of the great Assamese General at both the national as well as international level," said veteran journalist and author Samudra Gupta Kashyap, who has recently published a book titled, "Assam's Great Heroes Who Fought the Muslim Invasions".

He told IANS "It is a matter of regret that while kings and generals of other parts of the subcontinent have found place in Indian history, repeated invasion of Assam for nearly five centuries, beginning with Bakhtiyar Khilji of the Slave Dynasty in 1206 A.D., have somehow not found favour with our historians."

In his book, Kashyap has given in detail how Qutb ud-Din Aibak, soon after taking over the reins of Delhi, had dispatched Ikhtiyar al-Din Muhammad Bakhtiyar Khilji on a mission to central and eastern India.

"After conquering Bihar and Bengal in 1203 A.D., Khilji headed for Assam. But such was the counter-attack by the Kamrup (Assam) king Viswasundardeva that Bakhtiyar Khilji somehow managed to get back to Bengal after his entire army was literally wiped out on the banks of the Brahmaputra," Kashyap in his book said.

The Kamrup king's victory over the first-ever Muslim invaders of Assam has been recorded in a rock inscription at Kanai-Borosi-bowa near Guwahati.

"Since then, there were a series of invasions of Assam by different Muslim rulers of Delhi and Bengal. While the invaders were successful in a few of those attempts, Assam however had managed to resist the invasions in most cases, with the kings of Kamrup as well as a number of local chieftains fighting valiantly with traditional weapons against the better-equipped invaders."

"While it were the Sultans of Delhi and Bengal who had invaded Assam for the first four decades, it was only from 1613 A.D. onwards that the Mughals eyed Assam, leading to several major wars," Kashyap said.

"The book describes in detail the 1661 invasion led by Aurangzeb's commander Mir Jumla, one that led to a prolonged war lasting a little over a year, during which the Mughals occupied the whole of Assam. But, while the Mughals forced the Ahom king to sign the Treaty of Ghilajharighat in January 1663 and pay a huge indemnity, preparations however were soon begun to oust the Mughals."

"It was at this juncture of history that Assam saw the emergence of a new General in Lachit Borphukan to recover the lost glory. A master military strategist, Borphukan easily reoccupied Guwahati in November 1667 and freed most of Assam from the grip of the Mughals. Borphukan, however knew that the invaders would soon come back with renewed strength, and prepared for a string defence," the author wrote.

Thus, even as Aurangzeb in December 1667 dispatched a 50,000-men army under Ram Singh of Amber "to teach a lesson" to the Assamese, Borphukan put his strategies into full use, and despite losing about 10,000 soldiers in a day-long battle at Alaboi near Guwahati on August 5, 1669, he successfully lured the invaders into a naval battle on the Brahmaputra three months later, to inflict the most crushing defeat on the enemy in the mid-March 1671.

The book describes in detail how Borphukan personally led his men from the front despite ill-health, and as hundreds of Mughal soldiers perished in the Brahmaputra, it forced the invaders to withdraw from the battlefield and retreat. The Battle of Saraighat, which also marked the beginning of military decline of the Mughals, is today remembered as "the greatest naval battle fought on a river".

Author Kashyap has quoted eminent historians who had described Barphukan as "a born leader whose captains and soldiers obeyed his command to the minutest detail". One historian had stated that "Lachit Borphukan had tuned his measures to one single objective, that of victory at any cost. His soldiers were nursed from the very beginning in one solitary dream, it being the victory of the Assamese; and an impression was given to Ram Singh (the Mughal commander) that his defeat was a foregone conclusion".

But, while Borphukan had passed away immediately after the victory at Saraighat, the Mughals once again managed to occupy Guwahati (and the entire Assam) in 1679. It however took less than three years to oust the invaders again, and as the book points out, the Mughals never looked at Assam since the final defeat in August 1682.

(Sujit Chakraborty can be contacted at sujit.c@ians.in)