New Delhi, Nov 22: The government said on Tuesday that the negotiations on the proposed free trade agreement (FTA) between India and the UK are very much on track and are expected to restart next month. 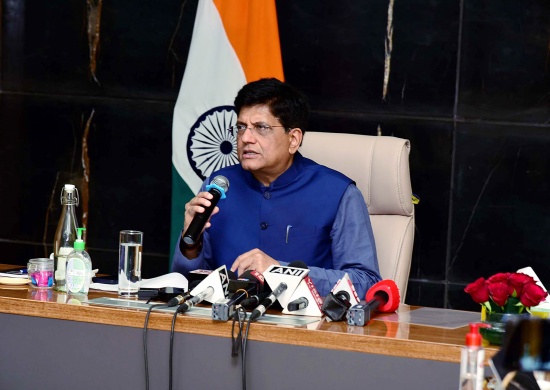 Union Commerce Minister Piyush Goyal, while speaking on the sidelines of a steel industry event, said that the India-UK FTA is a high-priority issue for both the nations and negotiations on it are expected to take place next month.

Goyal said he is already in touch with his UK counterpart for the next round of talks on the trade pact.

He added that while things on the agreement were progressing quite fast, due to the political developments in the UK, there was "little bit of a blip" (after Boris Johson and Liz Truss resigned in quick succession as Prime Ministers and Rishi Sunak took charge last month), "but now there is a stable government (in the UK) and efforts are on to restart the negotiations next month".

The Commerce Minister added that industry support is required for the agreement, which should be a balanced one for India.

He also said that there cannot be strict deadlines for wrapping up such sensitive negotiations, as thorough discussions are needed to safeguard the country's trade interests.

Both India and the UK had begun discussions on the FTA in January this year, and former British Prime Minister Boris Johnson had expressed optimism that these would be concluded by Diwali (October 24). However, due to the political crisis in that country, things got delayed.

Jail reforms in India: Miles to go from being overcrowded, understaffed
4 must-have skincare ingredients for a perfect winter glow