It could have gone either way, says Southee on rain-forced tied 3rd T20I in Napier

Napier, Nov 22: New Zealand skipper Tim Southee on Tuesday said the rain-affected third and final T20I against India which ended in a tie, would have been an interesting game and could have gone either way if both sides had batted for the whole overs. 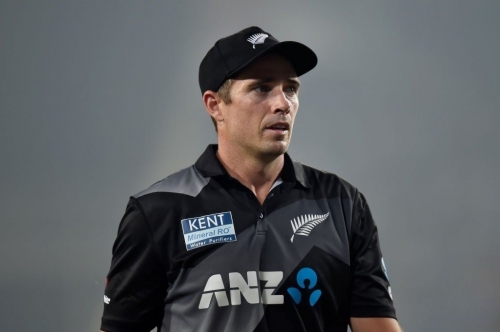 After New Zealand won the toss and opted to bat first, Indian pacers Mohammed Siraj (4/17) and Arshdeep Singh (4/37) produced sensational bowling performances and scalped four wickets each to bowl out the Black Caps for 160 despite fighting half-centuries by Devon Conway (59 off 49) and Glenn Phillips (54 off 33).

Chasing 161 to win, India were reeling at 21/3 in 2.5 overs but Hardik Pandya hit three boundaries and a six during his unbeaten knock and along with Deepak Hooda (9 not out off 9) took India to 75/4 in 9 overs when rain stopped play.

According to DLS, 76 would have been the winning score for India after 9 overs but they were 75, which was the par score. With incessant rain lashing the McLean Park, the match couldn't be resumed and eventually, it ended in a tie as India clinched the three-match series 1-0, courtesy of their 65-run win in the second game in Mount Maunganui on Sunday.

The first game between the two sides at Wellington was washed out without a ball being bowled.

The 33-year-old Kiwi pacer admitted his team could have done better with the bat but lauded the bowlers for taking three quick wickets.

"It was disappointing even with the bat. We spoke about getting out there and giving everything we could and taking early wickets. We knew if we could get those wickets, anything could happen, but unfortunately, the weather came in," said Southee, who claimed 2 for 27 in his three overs, in the post-match presentation.

"You don't know until both sides batted on it, it would have been an interesting game but it hasn't gone to full tilt. A little bit of uncertainty around the scoreboard (about) whether it was a tie when the rain came in. Could have gone either way, the way we attacked with the ball and to put them under pressure was pleasing," he added.

With the T20I series coming to an end, Southee is now looking forward to the ODI series, starting on November 25.

"Nice to be back in some ODI cricket against a quality side like India. Hoping for a good crowd in Auckland," he said.

It could have gone either way, says Southee on rain-forced tied 3rd T20I in Napier