Jashn-e-Rekhta back in Delhi with its seventh edition

New Delhi, Nov 23: Last held in December 2019, the Jashn-e-Rekhta festival is returning on-ground after a pandemic break of three year. 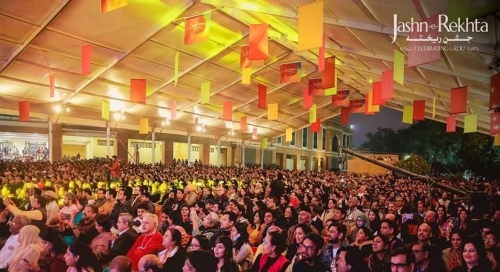 To be held from December 2 to 4, at the Major Dhyan Chand National Stadium, the festival will be spread across three days, four stages, 60 events, and 150 artistes

Organised annually in Delhi under the aegis of Rekhta Foundation - a non-profit organisation, operating a free online resource and the world's largest website and resource for Urdu poetry and literature, the festival aspires to unite language lovers from every part of the world to celebrate Hindustani languages, its rich history, and culture.

The inauguration will be attended by Javed Akhtar, followed by a ghazal concert by Hariharan, and will conclude on December 4 with a Sufi music performance by Richa Sharma.

Sanjiv Saraf, Founder Rekhta Foundation says. "Jashn-e-Rekhta aims to bring people closer through the celebration of the Urdu language, its music, art, culture, and its Indian ethos. It was last celebrated in December 2019 after which COVID disrupted life as we know it. However, people exhibited remarkable resilience and came together in overcoming this challenge. I am delighted that the 7th edition of Jashn-e-Rekhta 2022 is being held after a period of three."(IANSlife can be contacted at ianslife@ians.in)

Jashn-e-Rekhta back in Delhi with its seventh edition