Doha (Qatar), Nov 22: Spain kick off their FIFA World Cup campaign against Costa Rica on Wednesday looking to build on their performance in last summer's European Championships, where they reached the semifinals before losing on penalties to eventual champions Italy. 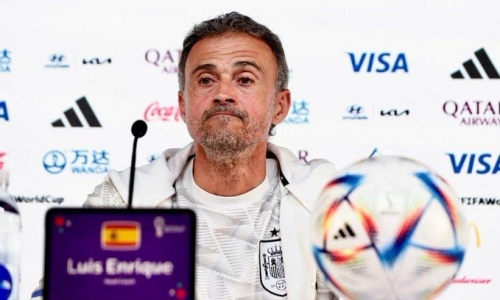 Spain coach Luis Enrique has put his faith in a young squad of players who, despite their youth, already have plenty of experience in domestic and European football.

Unai Simon is a fixture in goal, while Aymeric Laporte and Eric Garcia will probably play in central defense, with Jordi Alba and Dani Carvajal as the full-backs.

There could be a Barcelona trio in midfield, with Gavi and Pedri accompanying either Sergio Busquets or Manchester City's Rodri, while Alvaro Morata will lead the attack, partnered by two of Dani Olmo, Ferran Torres and Ansu Fati.

The 20-year-old Fati has worked his way back to fitness after two years of injury struggles and, along with Athletic Bilbao's 20-year-old winger Nico Williams, offers explosive pace and the ability to get past a marker that others may not have.

Scoring goals is likely to be Spain's main issue in Qatar, but Morata -- who has 27 international goals -- insisted that it was not just a question for the forwards, but for the entire team.

"We all have to share carrying that rucksack," commented the Atletico Madrid striker on Monday.

While Spain have put their faith in youth, Costa Rica will trust experience, with PSG's former Real Madrid keeper Keylor Navas in goal, and other veterans such as Bryan Ruiz and Celso Borges, who have 291 caps between them, likely to feature, reports Xinhua.

Joel Campbell, who spent time with Spanish club Real Betis, will probably start, and that experience will be important for a squad filled with players from Costa Rican domestic football.

This will be Costa Rica's sixth appearance in the World Cup finals, and although they have won just five of those matches, a word of warning for the Spanish three of those wins came in their opening game.