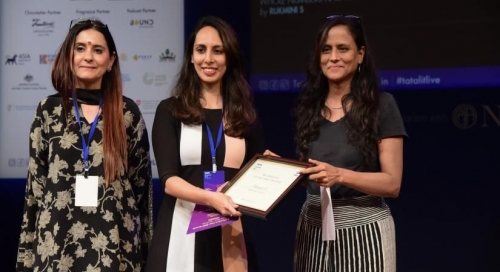 In a combined 'hybrid' version for the first time, virtual as well as on-site, the 13th edition of Tata Literature Live! The Mumbai LitFest was a huge success with 135 authors, 11 countries, 75 sessions, a landmark 9 book launches. The virtual sessions over two evenings have already attracted over 1.5 million views. The Festival was on-site again after two closed pandemic years and delighted audiences surged into myriad riveting sessions at the on-site venues at NCPA at Marine Drive and St Pauls Institute and Title Waves bookstore in Bandra, resulting in overflowing sessions and performances. The Tata Theatre rocked with Usha Uthup ending her session with rousing renditions of medleys of some of her evergreen songs.

The winners of the Tata Literature Live! Literary Awards 2022 are as follows

Tata Literature Live! Book of the Year (Fiction) The Map and the Scissors by Amit Majmudar - Published by HarperCollins Publishers

Tata Literature Live! Book of the Year (Non Fiction) Lords of the Deccan Southern India from the Chalukyas to the Cholas by Anirudh Kanisetti - Published by Juggernaut Books

Tata Literature Live! Business Book of the Year The Ambuja Story How a Group of Ordinary Men Created an Extraordinary Company by Narotam Sekhsaria - Published by HarperCollins Publishers

Ayushmann felt he was making his debut again during shoot of 'An Action Hero'
Samsung Galaxy M54 OLED panel may develop by CSOT, BOE