Jaipur, Nov 14: Artistes, writers and art connoisseurs from across the country engaged in enriching and invigorating sessions on day two of the AWWA Lit Festival 'Abhivyakti Season 2', which is underway here. 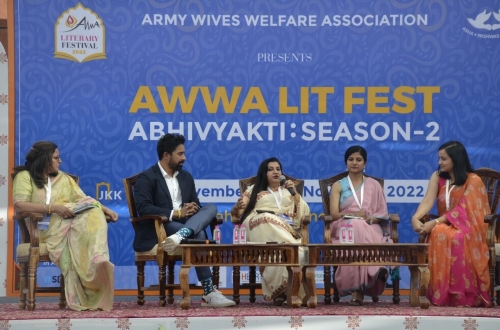 Organised at Jaipur's Jawahar Kala Kendra, the theme of the second day on Sunday was 'Khula Aasman' - providing an open platform for a wide range of creative activities.

The day commenced with the interview of Shiv Aroor, a celebrated author. Aroor's presence at the Litfest was rather appropriate given that he has authored many military books besides being a Defence Correspondent. Ravneet Bhinder, Regional President AWWA launched a book 'The Jungle Book of Rhymes' written by Jyotsna Atre in the session that followed.

At 'Rangayan' auditorium, the morning session commenced with 'Chatroom/Ikhtiyar-E-Khwab Meet your Poet' which witnessed poets sharing their compositions with the audiences. This was followed by a literature theme-based Kathak performance by Sucheta Shiv Kumar iamp; troupe.

Simultaneously at the 'Madhyavarti' auditorium, the day was kick-started with 'Roobaroo Part-II with 'Meet Your Author'.

Post lunch session at 'Rangayan' commenced with 'Kitabon Ki Zubani' which featured Swapnil Pandey, Simran Randhawa and Vandana Yadav narrating excerpts from their works. This was followed by the session 'Mera Desh Meri Jaan' featuring Anuradha Prabhudesai and Sartaj Lamba which focused on initiatives taken for the cause of soldiers and the need to do more.

At 'Madhyavarti', the post lunch session commenced with 'Zindagi Ek Safar' which focused on travelogues and travelling experiences of the writers. The next session at 'Madhyavarti' was 'Dream Big, Achieve Big' which took forward the success stories of women entrepreneurs making it big despite all odds.

Besides the above, there were two workshops - the first workshop was 'Creative Writing' by Sutapa Basu. The next workshop was 'Empowering Yourself to Articulate Your Aspiration' by Anandita Roy, Dr Ritu Sharma iamp; Priyanka Jaitly Judge.

In addition, a Nukkad Natak by NCC cadets, conversation with Rannvijay Singha of Roadies fame, a song performance and a musical performance by the Army Symphony Band added to the excitement through the day. Going by the buzz at Jawahar Kala Kendra, the final day of the event is eagerly looked forward to.

On November 12, 'Abhivyakti Season 2' was inaugurated at Jawahar Kala Kendra by Archana Pande, President AWWA with the customary ribbon cutting and lighting of diyas. Thereafter, she launched the book 'Amaltas' written by Nidhi Khali Dhyani.

Addressing the gathering, she spoke on the important role of AWWA in supporting Army wives in all their endeavours. She also spoke about the journey of 'Abhivyakti' and its role towards women empowerment.

Acclaimed writer Swapnil Pandey, author of 'Force Behind The Forces' was part of a panel discussion with Veer Naris wherein the latter shared his inspiring and touching stories.