London, Nov 10: Daily Sikh prayer books, called the Nitnem Gutka, have been issued to Sikh military personnel in the UK for the first time in 100 years, a media report said on Thursday. 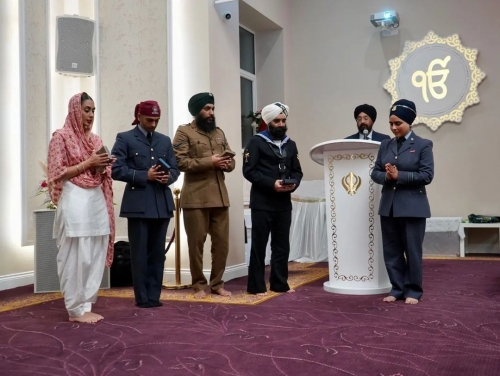 The prayer books have been printed in three languages in durable and waterproof material to withstand the rigours of military life, said the BBC report.

While the British Army Gutka has a camouflage cover, the Royal Navy and RAF Gutka has a navy blue one.

Major Daljinder Singh Virdee, who is in the British Army and has spent two years campaigning for the return of the books, said on Wednesday "The Army has been providing Christian religious texts for many years and I saw the opportunity there to open the door for the Sikh faith to provide Sikh texts."

The Nitnem Gutkas were printed in Wiltshire and placed on a throne in a purpose-built vehicle for Sikh scriptures.

They were transported to the library of the Central Gurdwara temple in London, where they were officially issued to military personnel on October 28, the BBC reported.

Also the chairperson of the UK Defence Sikh Network, Major Singh Virdee, who uses his Nitnem Gutka three times a day, said "For Sikh's our scriptures are not just words, they are the living embodiment of our guru. We draw moral strength and physical strength from reading the scriptures every day, it gives us discipline and it grows us spiritually," he said.

Nitnem Gutkas were first issued to military personnel more than a century ago, along with other articles of the Sikh faith including steel daggers, bracelets and wooden combs, but have never been issued again since.

There is an original military-issued Nitnem Gutka in the National Army Museum's archives, in London.

Sikh soldiers were recruited to the British military from the 1840s onwards, reports the BBC.

In response to the development, the Ministry of Defence (MOD) said on Wednesday that it hopes to "directly support Sikhs practice a key component of their faith".

"By providing a Nitnem Gutka for serving Sikhs across the UK MOD we hope to directly support Sikhs practice a key component of their faith wherever they travel and work in whatever conditions," the BBC quoted a Ministry spokesman as saying