Sunak rushed out of stage at COP27: Report 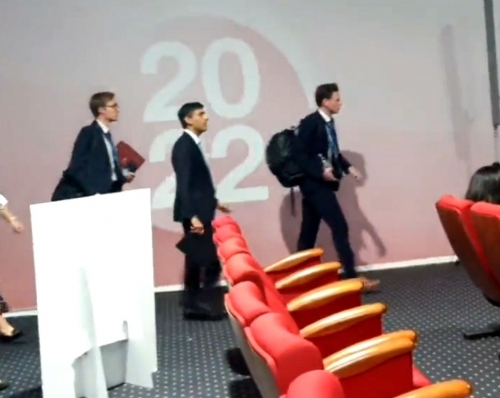 A video of the incident on Monday was captured by Leo Hickman, the director/editor of UK climate change website, Carbon Brief, reports the London World news outlet.

Hickman shared the video on Twitter in which he mentioned that "UK Prime Minister Rishi Sunak has just arrived at launch of the Forests and Climate Leaders' Partnership at COP27".

According to London World, Sunak "was on stage with other world leaders for a climate change event when his aides interrupted him".

There was however, no information on what the aides conveyed to thee Prime Minister.

Even the Downing Street has made no statement on the incident.

In a keynote address to the summit on Monday, Sunak said that "climate security goes hand in hand with energy security" and that the ongoing war in Ukraine and rising energy prices are reasons to act faster to tackle climate change.

This was his first appearance in an international arena since he took office last month.

Leaders from 120 countries are meeting in Sharm El-Sheikh to discuss next steps in curbing climate change.

Key topics are compensation and support for the most-affected countries.

Sunak rushed out of stage at COP27: Report