Camus: A philosopher for our perplexing, absurd times

By Vikas Datta: We live in strange times -- technology has brought the world as close as it can get, physically and virtually.

At the same time, the concept of globalisation is getting discredited and replaced by a rather hyper variant of nationalism -- which even seeks to own and fence off universal human endeavours such as art and science behind borders, force a trade-off between prosperity and liberty, and foist a sense of conformity. 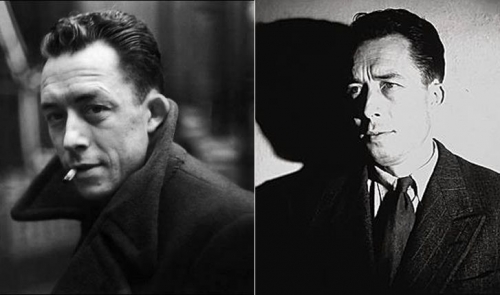 And when we have almost all that we may want (cool technological devices, fast vehicles and creature comforts beyond the imagination of our ancestors, to say the least), but are still not content, what can be done?

One recourse for the latter would be to turn inward to religion or philosophy -- but all of the first and a lot of the second are based on some variety of divine design and control over humans, maybe for their benefit -- the universe conspiring to help you attain something you want, as Paulo Coelho says in 'The Alchemist'. But, we may also find that the universe could be hostile, or worse, absolutely indifferent.

At such a time, it may be useful to retrace the thought of a charismatic French philosopher with movie star looks (he bore an uncanny resemblance to Hollywood star Humphrey Bogart) -- the man who identified the absurd existence we find ourselves in, or rather, told us clearly that our life is a meaningless struggle and what we can do about it.

Albert Camus, who was born on this day in 1907, is usually considered an existentialist or a nihilist -- but rejected both labels, to instead fashion 'Absurdism', not in its literal meaning of being illogical, but to stress the futility of man's inclination to seek meaning in life given his incapability to find any.

Hence the absurd, denoting the quest for an impossibility -- not logical, but arising from the limitations of human ability -- and not caused by either the universe or human thought, but from their simultaneous, contradictory presence.

Camus was not the progenitor of Absurdism, which can be traced to the writings of the 19th-century Danish theologian, author, social critic and first existentialist' philosopher Soren Kierkegaard (1813-55). He can be credited, though, with making it a distinctive system of thought, separate from both existentialism and nihilism, and suggesting the more credible way to face up to it -- at variance with his Danish predecessor.

Considered to be one of the brightest sparks in the City of Lights (though not born in the city or in even France) as post-war Paris entered its last glorious spell as a cultural hub before being overtaken by London and New York in the 1960s, Camus did all this by a particular French expedient -- the medium of fiction rather than a theoretical presentation.

Setting out his philosophical outlook better are his novels -- L'Etranger (The Outsider rather than the literal The Stranger; 1942) about the murderous but strangely indifferent Mersault; La Peste, 1947 (The Plague), on pestilence sweeping an Algerian town and the responses of the residents; the posthumously published incomplete fictionalised autobiography Le Premier Homme (The First Man), 1995 -- and plays such as Caligula, about the homicidal and insane Roman emperor and his peculiar logic (1938; first performed 1945).

Camus did also write non-fiction as a vehicle, though these were long (even book-length) essays, than any structured accounts, and notebooks containing his thoughts.

His early thought appeared in his essay collections L'Envers et l'endroit (Betwixt and Between), 1937, and Noces (Nuptials), 1938. It would fructify, however, in The Myth of Sisyphus, where he uses the example of the Greek mythological character condemned to roll uphill a heavy stone, which slipped back as soon he reached the top, to depict human existence.

What is the solution, asks Camus in this immortal piece, but like Kierkegaard, he rules out suicide. The Dane suggested a leap of faith -- an irrational but necessary religious acceptance, but Camus would not have this, suggesting instead embracing the absurd condition while defiantly continuing to explore and search for meaning. Thus he is firmly for humans taking the purpose of a meaning to their lives on themselves.

Beyond the individual problems, Camus, a passionate votary of political tolerance, dialogue, and civil rights, staunchly stood for human freedom beyond constraints of ideology, and opposed totalitarianism in politics and thought, dealt with these issues in the last two decades of his tragically short life -- not only in his writings but also in public gatherings.

He dealt with the responsibility and the right of artists to their opinion against the backdrop of changing social and political dynamics and pressure -- a discourse that may strike a chord among Indians.

Speaking at Sweden's ancient and prestigious Uppsala University in December 1957, a few days after he became the second youngest recipient of the Nobel Prize for Literature, Camus, noting that writers attract criticism whether they speak or not, stressed that they cannot -- and should not -- remain aloof, due to the purpose of art, the artist's freedom and, especially, despite the attitude of the state.

Little wonder then, his Nobel citation noted that he was being honoured for his important literary production, which with clear-sighted earnestness illuminates the problems of the human conscience in our times.

In an address, famous as Defence of Intelligence, delivered in March 1945 at a meeting of a group seeking accord and amity in a just-liberated France -- even as the Second World War still raged, Camus made an eloquent plea against violence and hatred and the divisiveness they engendered.

Mincing no words at the barbarity they had just endured -- which he noted had also left its mark on the victims, some of whom retaliated in kind at the first chance -- he advocated curing poisoned hearts by saving one's intelligence. And intelligence here is a sense of reason, discernment and objectivity, not mere mental capability.

And then, in an address delivered at a labour exchange in May 1953 (later published as Bread and Freedom), Camus, who was a leftist but never condoned Stalinist excesses, made a blazing attack on totalitarianism and majoritarianism.

Saying that if some trends continued, one could foresee a Europe of concentration camps, where the only people at liberty will be prison guards who will then have to lock up one another, he sought to dismiss the disingenuous stand that if citizens have their basic economic needs met, they do not require political liberty.

Given the absurdity all around in our personal and public lives, Camus is a thinker who definitely needs to a re-read -- more than six decades after his untimely death.

Camus: A philosopher for our perplexing, 'absurd' times