Ostrava (Czech Republic), Oct 5: No 1 seed Iga Swiatek on Wednesday became the first player to reach the Ostrava Open 2022 quarterfinals after qualifier Ajla Tomljanovic was forced to retire due to a left knee injury trailing 7-5, 2-2, here. 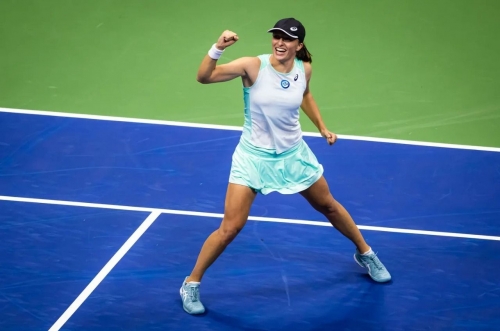 Playing her first match since lifting her third Grand Slam trophy at the US Open, Swiatek found herself embroiled in a tight tussle against Tomljanovic before the Australian started to ail in the second set. Tomljanovic began to clutch her knee in the second game of the second set, and called it quits after holding serve to level at 2-2.

Prior to that, Tomljanovic had been pushing the Pole to the limit. Swiatek raced out of the blocks, in complete command of her game and dominating play as she leapt out to 4-1. She came up with a series of spectacular winners to come two points from a 5-1 lead, but once Tomljanovic had escaped with the hold, it was game on.

Tomljanovic levelled at 4-4 and held two break points, but could not take either. Instead, it was Swiatek who squeaked the set, converting her second set point as Tomljanovic netted a volley.

No 34-ranked Tomljanovic continued to demonstrate her competitive spirit in a fiercely contested start to the second set, in which all four games went to deuce. Two astonishing gets from Swiatek helped her come through a six-deuce second game to break Tomljanovic back, but unfortunately the match would be abbreviated two games later.

"We played in Toronto and I saw in the US Open how well Ajla played -- it seems she's really on a roll and she's playing better and better. It was a great match and it's unfortunate that something happened -- I hope she's going to recover quickly," said Swiatek.

"I've had a three-week break from playing matches, and after such an intense time it seems like a lot. I felt like I need to get back to the rhythm, and it wasn't easy. I had a bye, and Ajla already played a few matches.

"So I felt like I needed to catch up. But I'm pretty happy this match was so intense, because I feel like I had to go to another level and it's going to prepare me for the next matches," she added.

With this, Swiatek moved into her 11th WTA Tour quarterfinal of the year, where she will face either home wild card Karolina Muchova or qualifier Caty McNally. Both players, renowned for their variety, delivered impressive highlight reels en route to their first-round wins. McNally's touch (and a delightful tweener) got the American past fellow qualifier Anna Blinkova 6-1, 6-2 on Tuesday.

Preceding Swiatek on Center Court, former World No.19 Muchova upset No.7 seed Beatriz Haddad Maia 6-4, 6-4, coming from a break down in both sets. It was the Czech's first win over a Top 20 opponent since defeating Maria Sakkari in the second round of Roland Garros, and continues an uptick in form this month after an injury-hit season.

Swiatek, a semifinalist in Ostrava last year where she fell to Sakkari, is bidding for her first tour-level title on indoor hard courts this week. She has won one ITF trophy on the surface -- the Stockholm W10 in 2006, her first ever pro title at the age of 15.