The Return of the Native Part 2: Miracle in the forest pays rich dividends for Udalguri

Udalguri, Oct 4: The five-year-long effort to breathe life back into the Bhairabkunda forest in Udalguri district of Assam was surely a success.

But with it has come bigger responsibilities. 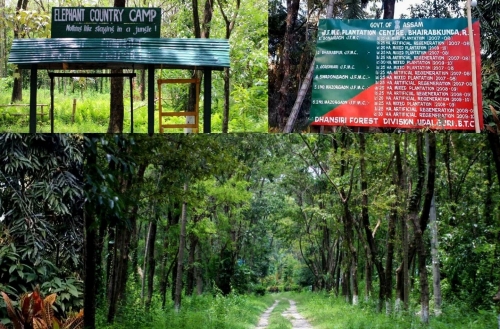 The forest now has several high-value timber species, and there can be no compromise on the security front. "With the help of villagers, we keep a strict vigil on smugglers. No one has ever dared to enter the forest," said Gethsemane Joint Forest Management Committee (JFMC) secretary Bilup Daimari.

He said they have never sold any trees. "The village women who collect the fallen branches for firewood sometimes sell them to sustain themselves," he added.

"We often collect wood from the jungle, which serves as fuel for cooking," said Phulmani Kisku, who also grows saplings from the seeds collected from forest trees. She has more than 80 arecanut trees in her home garden, fetching nearly 3 tonnes of harvest annually.

The man-made forest also houses a big pond. "We created this water source (0.82 acre to be precise) to rear fish. It fetches us good revenue every year," said Atul Basumatary, a Gethsemane JFMC member.

A three-room guest house built at a cost of Rs 10 lakh using the funds provided by the district administration serves both as a homestay and a green open space for get-togethers and meetings. In all, it can accommodate six persons, with each room costing Rs 2,000 a day. The Gethsemane JFMC uses the income thus generated to strengthen its forest revival strategies.

"The guest house was built after Thaneswar Malakar, the then Udalguri deputy commissioner, proposed the idea upon his visit to the forest. He also arranged funds from the district administration," explained Swmkhwr Daimari, another JFMC member.

Tourists from 24 countries, including Japan, China, Bangladesh, Nepal, Australia and the UK and US, have visited the vacation home so far and contributed to the tourism economy.

The forest community has also entered into apiculture and meliponiculture, the cultivation of honey from stingless bees belonging to the Apidae family. Last year, Assam Investment Advisory Society, a local NGO, facilitated 10 days of training in meliponiculture for four JFMC members in Umrangso of Dima Hasao district.

"The honey extracted from these stingless bees has unique medicinal value, contains much less sugar than regular honey, and has a tangy taste. It can fetch a good price in the market, ranging from Rs 7,000 to Rs 9,000 per litre," said Prinson Daimari, the president of Gethsemane JFMC.

"We are rearing these bees on a pilot basis in about 30 small boxes attached to a row of wooden poles. But the bees are yet to produce honey. If the product is good, we will introduce it among locals living on the periphery of Gethsemane JFMC to explore it as a sustainable livelihood option."

About the future plans, Prinson said, "If everything goes well, we will export it to Malaysia and some European nations, where the demand is high. Even in states like Sikkim, it will fetch Rs 6,000 per litre."

The habitat restoration and ecotourism efforts of Gethsemane JFMC got a big boost in 2017, when the Balipara Foundation established Elephant Country Camp, a centre to promote ecotourism under the Udalguri Landscape Mission and Rural Futures programme.

The foundation sponsored the plantation of nearly 80,000 saplings on 32 acres of land and employed villagers for the task. "The timber and fruit trees were mainly sowed as fillers to cover the barren areas of the forest," said Basumatary.

According to Saurav Malhotra, the co-founder of the Rural Futures programme, his organisation developed a unique model aimed at getting communities behind the value chain of rewilding forests - from seeds and nurseries to reforestation - almost five years ago. "With Gethsemane JFMC, our main targets were habitat restoration and tourism," he told 101Reporters.

"We emphasised that the man-made forest must be similar to the natural one, where trees traditionally viable to the ecosystem grow and and not those with economic benefits."

Many villagers were concerned about possible attacks from wild animals, when efforts for reforestation were still progressing. But there have been no such incidents till date.

"Elephant herds from adjoining areas of Bhutan and Arunachal Pradesh descend downhill and stray into the forest and villages, but have not led to any human casualty as they get enough fodder," said Sona Tudu, a woman residing on the forest fringe. Earlier, there were incidents of human-elephant conflicts here.

Unlike in the forest under Gethsemane JFMC, conflict is on the rise in other parts of Udalguri district. According to an official data from the Assam Forest Department, 31 elephants and 72 humans died in such incidents between 2016 and 2021. Crops in 905 hectares and 1,480 households were damaged.

"The man-elephant conflict was a burning issue in the Indo-Bhutan border area. But afforestation has provided fodder for the pachyderms. Though they sometimes enter the villages in the forest periphery, there have been no casualties," informed wildlife conservationist Nabajyoti Baruah.

"We believe the forest holds a strong potential in terms of ecotourism. The only thing is that both the government and wildlife organisations should actively promote the region," said Baruah.

Udalguri is a home-grown lesson in conservation, which shows how grassroots movements and community-led initiatives can help restore ecological balance and provide socioeconomic respite to forest-fringe settlements.

(The author is a freelance journalist and a member of 101Reporters, a pan-India network of grassroots reporters.)

The Return of the Native Part 2: 'Miracle' in the forest pays rich dividends for Udalguri