Mumbai, Oct 3: 'Bigg Boss 16' contestant Archana Gautam had a heated conversation with the captain of the house Nimrit Kaur Ahluwalia in the latest episode of the reality show.

She in fact went on to write 'Bekaar' on the forehead of Nimrit after the fight. 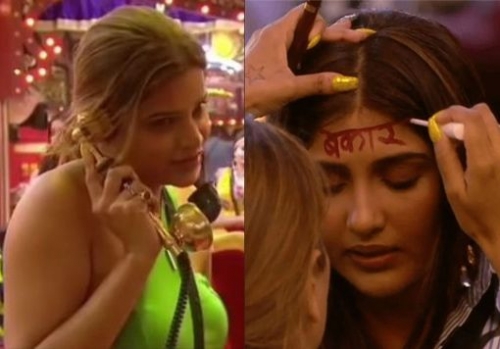 While Bigg Boss has announced Nimrit as the captain of the house, her job is to divide different duties among the contestants. Initially, she had asked Archana to cook for the housemates and she was happy as she loves cooking.

But later, Nimrit removed her from her duty saying there are already six people to do that. This made her furious.

To this Nimrit replied "I am a captain and I can change the duties whenever I want." To which Archana retorted "Yes you are a captain and you can give tasks but you just cannot keep changing the duties."

Sumbul Touqeer Khan and Tina Datta also supported Nimrit saying she is a captain and everyone has to do whatever she says. But Archana refused to listen to them.

Meanwhile, Bigg Boss has started playing his game and he gave prank calls to the contestants and also gave them certain specific tasks to perform.

Like he called the contestant and actor Shalin Bhanot as Aamir Khan and asked him to take a dip in the pool and he jumped thrice. While Gautam Vig received a prank call in the name of Hritik Roshan and asked him to go shirtless and show his body and do his signature step from the movie 'Kaho Na Pyar Hai' in each of the bedrooms.

While Sonu Nigam's prank call was picked by Tina and she was asked to sing the song 'Dil Deewana Bin Sajna Ke' from 'Maine Pyar Kiya' starring Salman Khan and Bhagyashree. And the last call in the voice of Pankaj Tripathi was for Archana and he asked her to go and write 'Bekaar' on the forehead of a person whom she feels is useless and she took a lipstick and rushed towards Nimrit and told her that she was given the task to write 'Bekaar' on her forehead.

But Nimrit didn't allow Archana to touch her but she did the task anyway. Nimrit was upset with this and told her that many of the housemates didn't like the tea she prepared but still she didn't tell Archana as she never wanted to hurt her but she took no time in hurting her sentiments.