Nadda's ambitious project of commissioning AIIMS Bilaspur, a premier hospital, in his political battleground, whose foundation stone was laid exactly five years ago, is all set to be inaugurated by Prime Minister Narendra Modi on Wednesday just days ahead of the state Assembly polls. 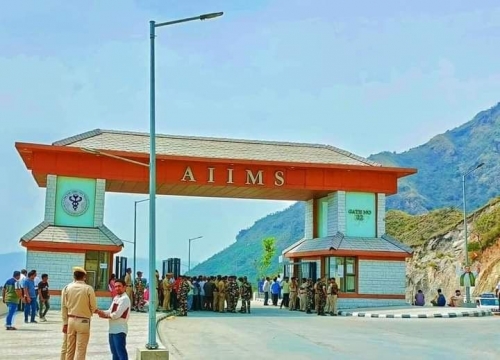 Modi will also be the first Prime Minister to attend Dussehra festivities in Kullu town on the same day, where a grand congregation of over 200 Gods and Goddesses annually assemble for the week-long celebrations.

Rajya Sabha Member of Parliament Nadda reached Bilaspur, located 130 km from the Himachal Pradesh capital, on Sunday to oversee the arrangements relating to Modi's visit to inaugurate AIIMS at Kothipura in Bilaspur district and later his address with a gathering of estimated one lakh people that is aiming to set the stage to build momentum for the upcoming Assembly polls.

The BJP-ruled hill state is likely to go to the polls for its 68-member Assembly in November.

"We are expecting a gathering of over one lakh people from across the state at the Luhnu ground. The public meeting will be held after the inauguration of AIIMS Bilaspur," BJP spokesperson Karan Nanda told IANS.

The devotional fervour will reach a crescendo when the Prime Minister will attend a centuries-old unique Kullu Dussehra festivity that begins on Vijaya Dashami, the day when the festivities end in the rest of the country.

"Modi-ji will be the first Prime Minister to attend the Kullu Dussehra festival after concluding his public address in Bilaspur," Nanda added.

Going by the legend, Lord Raghunath's chariot is wheeled out by the tens of thousands of devotees from his historical temple in Sultanpur in Kullu on the first day of Dussehra amid chants of "Jai Raghunath" and the sounding of trumpets and drums.

The festival dates to 1637, when Raja Jagat Singh ruled Kullu.

Modi is also expected to participate in the pulling of the chariot of Lord Raghunath, officials said.

The assembled deities follow the chariot in a ceremonial procession by the servitors.

Officials told IANS the 750-bed AIIMS is set up with an outlay of Rs 1,350 crore with facility for a medical college with an intake capacity of 100 seats and a nursing college with 60 seats.

Modi laid the foundation of All India Institute of Medical Sciences (AIIMS) in Bilaspur on October 3, 2017, with a deadline to be completed by December 2021.

AIIMS at Bilaspur is another milestone in the list of achievements of the National Democratic Alliance government in the health sector, former Union health minister Nadda has said.

It will provide the much-needed tertiary medical services to a vast population of those not only in Himachal Pradesh but other northern states also.

With his campaign, the Prime Minister will try to drive the aModi charisma' in the state and retain the power in assembly polls.

In one of his visits, Nadda expressed satisfaction that despite the Covid-19 crisis, the construction work was going on smoothly.

Thanking Prime Minister Modi and Nadda for approving the setting up of AIIMS in Himachal Pradesh and making adequate budgetary provision for its construction, Chief Minister Thakur said the state has released Rs 73 crore for providing power and Rs 65 crore for water supply to the hospital.

Other than AIIMS, the Prime Minister will also inaugurate the Hydro Engineering College at Bandla in Bilaspur and lay foundation stones for a Medical Devices Park in Nalagarh and a four-lane project from Pinjore to Nalagarh.

In the 2019 parliamentary elections, Nadda played an important role in his home state Himachal and helped the party retain all the four seats.

Nadda won his first Assembly election from Bilaspur (Sadar) in Himachal in 1993. In 1998, he again won from that seat and became the state health minister.

He lost the assembly elections in 2003, but again won in 2007 and was appointed the forest minister.

Born December 2, 1960, Nadda did his graduation from Patna in Bihar and holds a postgraduate degree in political science and LL.B. from Himachal Pradesh University in Shimla.

Starting his political career in 1978 as a student leader of the Akhil Bharatiya Vidyarthi Parishad (ABVP), the students' wing of the Rashtriya Swayamsevak Sangh (RSS), Nadda had also worked both with Nitin Gadkari and Amit Shah even in the Bharatiya Yuva Morcha -- from 1991 to 1994.

His wife Mallika Nadda, who was previously teaching history in the Himachal Pradesh University, also was an ABVP activist, and its national general secretary from 1988 to 1999.

A low-profile leader with astute organisational skills, Nadda was forced to resign as state forest minister in 2010 owing to differences between him and then chief minister Prem Kumar Dhumal.

At that time he joined the BJP president Nitin Gadkari's team and was made the party's national general secretary. On his departure he had told reporters that he was "leaving the state politics with a heavy heart".

(Vishal Gulati can be contacted at vishal.g@ians.in)