New Delhi, Oct 2: Two-time Olympic medallist P.V Sindhu on Saturday paid a visit to the Diamond Polishing Unit in Surat and also took part in Navratri events along with other Indian badminton players in Gujarat. 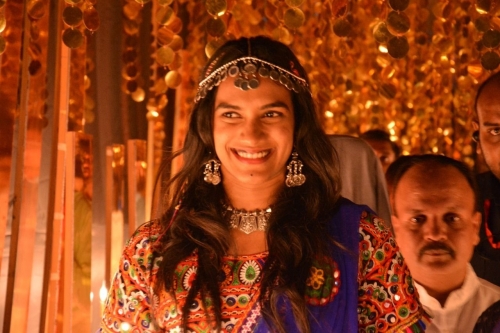 Sindhu is currently in Gujarat for the 36th National Games.

The Sports Authority of India (SAI) took to social media to post a video of Sindhu, in which she can be seen keenly observing the process of diamond polishing.

"Surat, the land of diamonds welcomed the diamond of Sports world, Badminton Champ @Pvsindhu1. Sindhu was invited to see the process of diamond polishing," wrote SAI Media in a tweet along with the video.

In another post, the ace Indian shuttler was seen in Gujarati attire, having some happy moments during the Navratri festival event. She was joined by other Indian players -- Chirag Shetty and HS Prannoy.

"All glittery in Gujarati attire, @Pvsindhu1 enjoying #Navratri vibes in #Surat on Saturday night along with @Shettychirag04 and @PRANNOYHSPRI," tweeted SAI.

The 27-year-old Sindhu is currently on the path to recovery after sustaining an ankle injury during the Commonwealth Games in Birmingham. She is not competing in the National Games 2022 due to the same injury.

However, it hasn't stopped the Indian badminton star from taking part in various activities during her stay in Gujarat in the last few days. She was also part of the Opening Ceremony of the 36th National Games along with other eminent sports personalities.

Barca struggle in Mallorca, Atletico win away to Sevilla in La Liga
On Saptami, all roads lead to Bhawani temple in Bihar's Thawe village