Seoul (South Korea), Sep 30: Yoshihito Nishioka earned just the second Top-5 win of his career on Friday, when he upset World No. 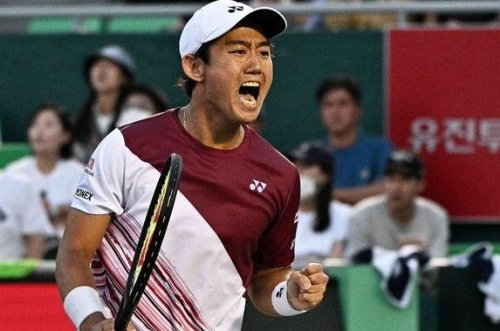 The Japanese star looked in control throughout the one-hour, 57-minute clash as he out-maneuvered the Norwegian with his variety, striking 32 winners and committing just 14 unforced errors to earn the biggest win of his season.

The 27-year-old, who downed Daniel Evans and Taro Daniel in straight sets earlier this week, will next play Mackenzie McDonald or American lucky loser Aleksandar Kovacevic as he aims to advance to his second tour-level final of the season.

Nishioka enjoyed a run to the championship match in Washington, where he lost to Nick Kyrgios.

The top-seed Ruud defeated Nicolas Jarry in his opening match at the ATP 250 event, with his victory earning him qualification for the 2022 ATP Finals. He was unable to match Nishioka's consistency, though, in their second ATP head-to-head meeting.

Earlier, fourth seed Denis Shapovalov soared past Moldovan Radu Albot 6-2, 6-2 in 73 minutes. The 23-year-old Canadian did not face a break point and has now improved his quarter-final record this season to 2-3.

Shapovalov, who reached the semifinal in Dubai in February, will next meet Jenson Brooksby after the eighth-seeded American received a walkover from second seed Cameron Norrie.