I am back home, says Shane Watson after landing in Jodhpur for Legends League Cricket

Jodhpur, Sep 30: Former Australia all-rounder Shane Watson has played a lot of T20 cricket in the state of Rajasthan.

He knows a thing or two about the ground conditions in the state's cricket stadiums and is well-acclimated with the weather. 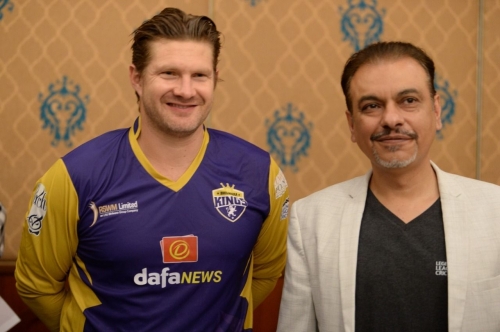 Therefore, he felt an immediate connection with the state's atmosphere when he landed in Jodhpur on Friday to play the Legends League Cricket.

The Aussie legend will be donning the jersey of Bhilwara Kings in the tournament and said that the state of Rajasthan is like his second home. "I am back home. I have so many incredible memories of playing in the state. I felt that connection again when I landed in Jodhpur today. The fans of the state love me and I am always humbled by their support. I am looking forward to playing here," Watson said in a press conference here on Friday.

Watson said the competition is high among the four teams and he will try to push the boundaries. With two matches left, all four teams -- Gujarat Giants, Bhilwara Kings, India Capitals and Manipal Tigers -- are in contention to clinch the playoffs berth.

"I am following the tournament. It's great to be here. I am well prepared. I know all the guys have been pushing their bodies to the limit. That's the commitment we always had towards the game. So it's not surprising to me. There's nothing like whether you have retired or not. You are always trying to push the boundaries when you are playing the game. With everyone giving their best, I will also try to push the boundaries," the 41-year-old said.

Watson's assessment of the tournament is indeed true. The game has seen tremendous competitive spirit among the cricketers. From Mohammed Kaif and Muttiah Muralidharan taking brilliant catches in the field to pacers Fidel Edwards and Tino Best peppering the batters with bouncers, the cricketers have refused to yield an inch without a fight.

Taylor agreed with Watson too. "Competitiveness kicks in when you cross the rope. I am really happy with the way the legends have played the game. We have shown a lot of spirit and I am looking forward to playing the matches with more vigour," he said.

I am back home, says Shane Watson after landing in Jodhpur for Legends League Cricket