Big B: Each hour on the sets of KBC has been a huge revelation

Mumbai, Sep 30: Megastar Amitabh Bachchan, who is hosting quiz-based reality show 'Kaun Banega Crorepati, says that each hour on the set has been a revelation for him and has brought an emotion that he had not experienced in such volume. 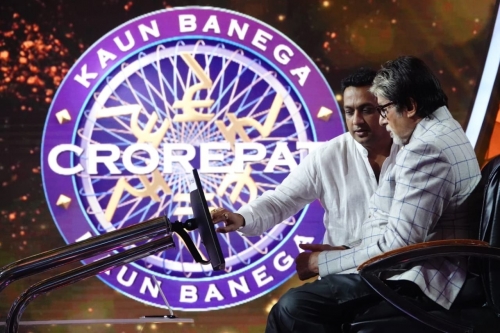 "Each hour on the sets of KBC has been a huge revelation for me and has brought an emotion that perhaps I had not experienced in such volume and fervour .. " he wrote in his blog.

Big B added "Love presents an immense gravity that pulls one down from whatever perched position they have been in .. gives its immense environ to encompass all .. its so involving and at times for keeps .. the affection in speech and form .."

"The words of togetherness and admiration have always been so inspiring .. they are the reason for the liberated fervour .. they .. the audience .. the younger generation the older and the mid range .. when there is none of this .. life lies listless and weak."

On the film front, Amitabh, who was last seen on the big screen in Ayan Mukerji's 'Brahmastra Part 1 Shiva', is gearing up for the release of upcoming film 'Good Bye'.

Big B: Each hour on the sets of 'KBC' has been a huge revelation