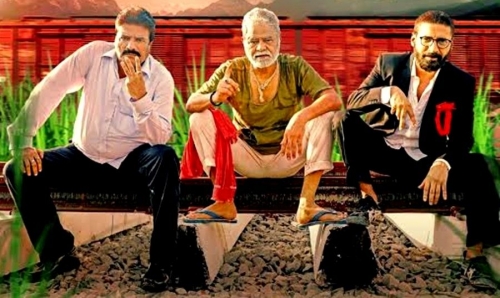 Some films are just not films but they are such a brilliant portrayal of real life that they make you richer in your experiences. Slated to be released this Friday, 'Woh 3 Din' is one such gem of a film which not only entertains you in a very unique way, but also introduces you to the harsh life in the country's rural and remotest areas.

The small-budget takes you to a small village in Uttar Pradesh where large-hearted rickshaw-puller Rambharose toils day and night to earn his livelihood. He dreams of providing a decent life to his wife and daughter. Through Rambharose's character the film shows comparatively how rural life is far more difficult than life in the cities.

Rambharose and his family's struggle to survive in the village has been portrayed in a heart-touching way that will definitely strike an emotional chord within you.

Rambharose's life turns upside down when he meets a passenger who insists on renting out his cycle rickshaw for three days. Unaware of the intentions of the stranger, Rambharose obliges him and takes him wherever he wishes to go. In doing so, Rambharose gets a jolt and during this dramatic journey he stumbles upon many 'secrets' along the way while travelling with the stranger.

Shell-shocked Rambharose doesn't know where to go and how to get out of the most unwanted situation of his life.

Through his character Rambharose, Sanjay Mishra once again proves why he is regarded as one of the most reliable and versatile actors of our times.

Rajesh Sharma, Payal Mukherjee, Chandan Roy Sanyal, Purva Parag and Amzad Qureshi also shine in their respective parts. Seepi Jha's writing is nuanced and Raaj Aashoo's direction is very effective. All these pluses make the film worth watching. Each scene and every character in the film is so powerful that it needs to be experienced on the big screen. What are you waiting for? Go book your ticket now!