New Delhi, Sep 28: Stern action by the British government, though a bit late, against widespread violence directed at Hindus in Leicester, intimidation in Birmingham and Coventry has brought peace to the UK.

The first day of the beautiful Navaratri festival with dance and music passed off peacefully on Monday across the UK without intimidation as was feared earlier. 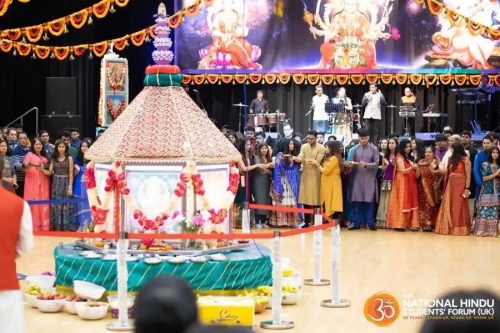 In a tweet to reassure the Hindus, the Leicester police said "To everyone celebrating - a very happy Navratri. There will be a visible and dedicated police presence throughout the celebrations. We're committed to ensuring everyone can celebrate safely".

The Leicester police increased visible patrolling and gave a shout out to residents to report incidents. It is reportedly investigating 158 incidents related to communal disturbances and steadily charging people for various violations.

The police in London hit the ground to keep trouble-makers away from temples. This came after a Muslim group on Twitter, Apna Muslims, gave a call for demonstration outside the Wembley temple. The Brent police said "We continue our patrols of religious premises, to ensure the safety of all on the borough of Brent".

Taking note of the threats to the Wembley temple, Barry Gardiner, MP for Brent North tweeted "I've contacted the police about the incitement to demonstrate at a Hindu temple in my constituency tomorrow. Anyone thinking of demonstrating should stay away and recognise that hate crimes carry jail sentences. Hindus should not go to "defend" the mandir. That is the police job".

Conservative MP from Harrow East, Bob Blackman had last week written to the UK Home Secretary Suella Braverman highlighting that hate crime against the Hindus has been growing. He even sought a meeting with her along with a delegation of Hindus to promote social harmony among communities and provide security to Hindu festivals.

In his letter, Blackman not only sought increased police protection for Hindu residential areas but even urged ministers to acknowledge instances of Hinduphobia.

The Leicester violence was a shock for multicultural Britain, which has been long espousing diversity of people living under a harmonious umbrella. The government saw those efforts go up in smoke as calls for attacks on Hindu places of worship spread from city to city.

Former BBC journalist Shiv Kant told India Narrative in an exclusive video interview earlier this week that radicalisation among the Muslims has been on the rise in the UK for a while now.

The British mainstream media, including The Guardian and the BBC, found themselves caught in a web of misreporting by their reporters and writers-eventually setting an agenda in favour of radical Muslims. Many of the untruths reported by the UK's widely respected media houses only helped in furthering animosity towards the Hindus. The BBC made a half-baked effort to say that it peddled misinformation.

Feeling wronged after misleading reports, and under attack from Muslim mobs, British Hindus are planned to hold a protest outside The Guardian's office in London on Wednesday morning "for their misleading and biased coverage". A press release issued on Tuesday says "As a result of Hindu hate filled articles in The Guardian, a vigil will take place outside their premises" at Kings Place, London.

With strict police action and investigations in Leicester and Birmingham, London was spared the fire and fury of Muslim mobs attacking temples. The police in Leicester is meanwhile untangling the web of Muslim outsiders called in from other parts of the UK to fan violence in an otherwise peaceful city.

The investigations have swung to critically look at the role of Majid Freeman, a Leicester-based Islamist who fired the initial salvos of fake news about Muslims under attack, creating Hinduphobia and leading to hate attacks.

The other spotlight is on London-based Mohammed Hijab who specially came to Leicester to lead Muslim groups through Hindu areas as "Muslim patrols". Hijab is well known in police circles for threatening the police, the Jews and now the Hindus.

(The content is being carried under an arrangement with indianarrative.com)