Noida, Sep 28: Twelve-year-old- Chilla elevated road project from Sector 14A Chilla regulator near Mayur Vihar in Delhi to Mahamaya flyover in Noida will gather momentum as the Centre has granted Rs 300 crore for it and four other works. 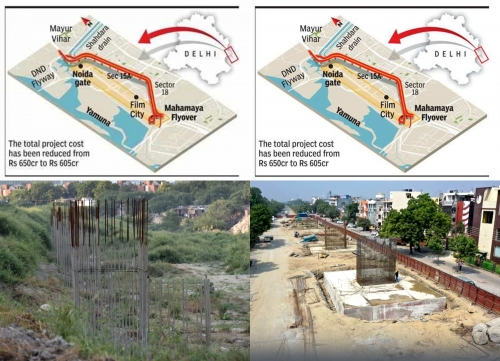 Noida authority had sought the Union government's assistance to complete the project.

With the Centre's financial assistance, the project that will connect Delhi to Uttar Pradesh is expected to be completed soon, benfitting around ten lakh people who commute from Delhi to Lucknow via Noida Expressway.

The elevated road was expected to come up at a cost of Rs 605 crore but it has now increased to Rs 850 crore.

The project was expected to be completed by 2021.

Earlier, the work for construction of the Chilla elevated road was initiated, but had to be halted due to several reasons, including the National Green Tribunal's (NGT's) objection to pollution, the outbreak of the Covid-19 pandemic, and lack of funds, among others.

Besides, a pact was signed between the Noida authority and Public Works Department (PWD), under which both had to equally share the expediture on the project but now the latter is not releasing the money. For getting money from PWD, reminders were issued many times but in vain. At last, loan from the Prime Minister Gatishakti scheme was sought which is interest free.

The Noida authority will have to use the money approved under the Prime Minister Gati Shakti scheme by March 31, 2023.

Four other projects for which the money has been issued are DSC elevated road, Parthala flyover, an underpass on expressway and Bahlolpur underpass.

Dream of every party worker to oust divisive forces: Akhilesh
Vikram says coming on 'The Kapil Sharma Show' was his 'destiny'