Ahmedabad, Sep 27: The picturesque Sabarmati flowing through the quaint city of Ahmedabad could soon become the hub for international rowing events in the country. 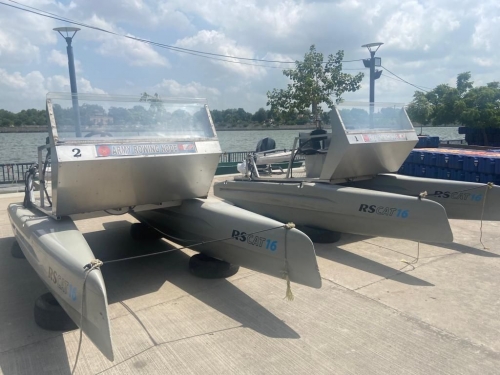 A dedicated course for the fascinating sport has been carved out in the waters for the 36th National Games, officially starting in Gujarat on September 29 with the mega Opening Ceremony.

The rowing events, in which 14 titles or gold medals will be up for grabs, will begin a day earlier on September 28.

Chief Technical Officer, also the Chief National Coach, Ismail Baig, has given the venue a big thumbs-up. "I'm pretty impressed with the venue and the course. It is easily the best in the country and is good enough to hold big international events," he said, even as he oversaw the final touches being given to make it competition-ready.

"The Sabarmati course thanks to the National Games will change the rowing scenario in the country, even ushering in a new era. It could also become a very good training centre for our rowers and help in encouraging the sport in a big way," Ismail Baig said.

Ismail Baig can't wait for the action to begin in rowing. "The water is very clean and smooth. India's top rowers will love the course. We can hope to see some very exciting races," he added.

Sabarmati Riverfront Venue Manager Joseph Martes acknowledged that there was a lot of excitement ahead of the event, the first major water sports competition in the State, that too right in the middle of the city.

"We have Rowing, Canoeing and Kayaking at this venue. It will give a huge boost to water sports in the State. We are expecting big crowds," he said.

Rowing competitions will be held in single, double and quadruple sculls, lightweight double scull, the eight and coxless pair in rowing.

With a number of international rowers in their ranks, Services are firm favourites. Olympians like Arvind Singh and Arjunlal Jat, who finished 11th in the Tokyo Olympics, will be among the top draws.

"Competitors will get a feel of the course a day before the competition begins on September 28. The finals will be held on October 2 and 3," Joseph Martes added.