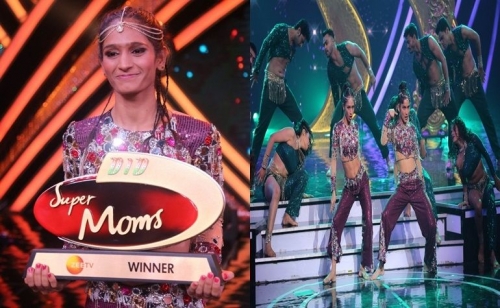 Apart from the trophy, she took home the winning amount of Rs 5 lakh and was also presented a cheque of Rs 2.5 lakhs by the sponsors. For Varsha, it was a moment of pride and felt like getting all the dues for her struggle and hard work.

The show, which started on July 2, was hosted by Jay Bhanushali and judged by Bhagyashree Dasani, Urmila Matondkar, and Remo D' Souza.

Hailing from, Hansi, Haryana, Varsha got married at the age of 17 and now she is a mother of a five-year-old boy. She works as a building construction labourer along with her husband. She learned dancing by watching videos and got perfection in different dance styles like popping, Hip Hop, and belly dance.

She said "I took inspiration from Vartika Jha, when I saw her on the dance reality show 'Dance Plus 4'. I used to watch her videos and learn dance steps from watching them. It was not easy for me to continue my dance practice, especially after marriage as people used to raise questions, 'you will be dancing on stage after marriage? Will it look good. But whenever I used to look at my son, I had a feeling like, 'I have to work hard for him. I must mention here that I got a lot of support from my husband."

She continued to say "My husband always told me, 'Don't listen to others, do what you want'. He motivated me to continue my dance practice and reach this level."

Varsha recalled her first day of the audition, saying "I still remember how nervous I was that day. There were so many doubts and apprehensions about my selection and today I have become a winner. Really it is a great achievement for me."

Varsha learned a lot from all the judges and one thing that she imbibed from them is to put all your efforts to reach your goal.

She mentioned "From all the judges, I learned to do hard work and never give up on anything."

At last, Varsha said the most cherished moment for her was "When my son, Grishal saw my performance and gave a beautiful smile, I felt proud and it gave me a lot of strength."

The show aired on Zee TV.

Matthew Wade could be looked at as new T20 captain by Cricket Australia: Report
UP Police to recruit sportspersons