Suriya 42 unit warns of legal action against those sharing videos, pics shot on its sets

Chennai, Sep 26: The makers of director Siruthai Siva's upcoming magnum opus, featuring actor Suriya in the lead, have asked those illegally uploading and sharing pictures and videos they've shot on the sets of the film not to do so and warned of strict legal action if the request is ignored. 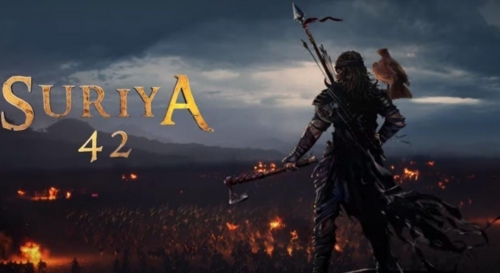 In a statement, production houses Studio Green and UV Creations said, A humble request to everyone! We have noticed that few are sharing 'videos and pictures' from the shooting sets of our upcoming production #Suriya42.

Every single work involves the blood and sweat of the entire team. We want to gift this movie as a grand theatrical experience to everyone. It would be a great favour if you delete/remove the published videos and pictures, and we request not to share the same in the future.

We would also like to inform you that strict legal action under 'Copyrights Infringement' will be taken against the ones who continue to do so.

The film, which has triggered a huge interest and being made on a lavish scale, is being made in 3D and will be released in a whopping 10 languages.

The exciting motion poster has a hawk hovering over a battlefield in which knights are battling it out, while Suriya's character, dressed in the attire of a commander, is seen standing on a rock and observing the proceedings on the battlefield. A motion poster released by the team has led many fans to wonder if 'Suriya 42' is a historical or a war film.

The film is being produced by Studio Green Gnanavel Raja and has music by Devi Sri Prasad. Disha Patani plays the female lead in this film which has cinematography by Vetri Palanisamy, who had shot superhits like Ajith-starrer 'Veeram' and 'Vedalam'.

Richard Kevin, who did a fine job editing superhits like the critically acclaimed 'Vikram Vedha' and the recently released webseries 'Suzhal', is the film's editor.

'Suriya 42' unit warns of legal action against those sharing videos, pics shot on its sets