Seoul, Sep 26: A freight train from the Chinese border city of Dandong was seen crossing a railway bridge into North Korea on Monday, marking the resumption of such a cargo service operation between the two countries after a five-month halt. 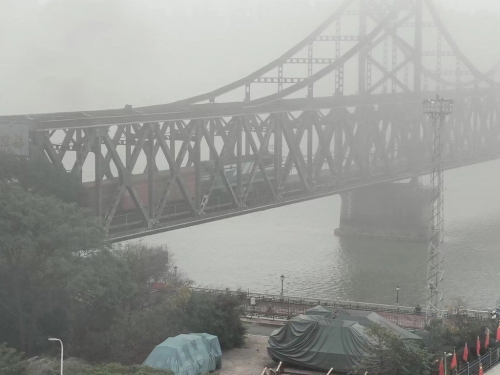 The train with more than 10 cars was spotted crossing the bridge over the Amnok River toward the North's border city of Sinuiju at 7.43 a.m., reports Yonhap News Agency.

Cross-border rail operation between the two countries had been suspended since April 29, following a lockdown in Dandong attributable to the spread of Covid-19.

The North also reported a coronavirus outbreak in May and had implemented "maximum emergency anti-epidemic" measures.

A source in China said cargo rail service between the neighbors has normalised with the stabilization of the Covid-19 situation, adding it is to operate one to two times a day.

Last month, North Korean leader Kim Jong-un declared victory in the country's battle against the virus, and Pyongyang announced a shift to the easing of some curbs.

In Seoul, the Unification Ministry, tasked with handling inter-Korean affairs, also said the two sides appear to have resumed a cargo rail service.