London, Sep 25: Novak Djokovic made a winning return at the Laver Cup, dispatching Frances Tiafoe 6-1, 6-3 and then partnering Matteo Berrettini past Alex de Minaur/Jack Sock 7-5, 6-2 to give Team Europe an 8-4 lead against Team World in London. 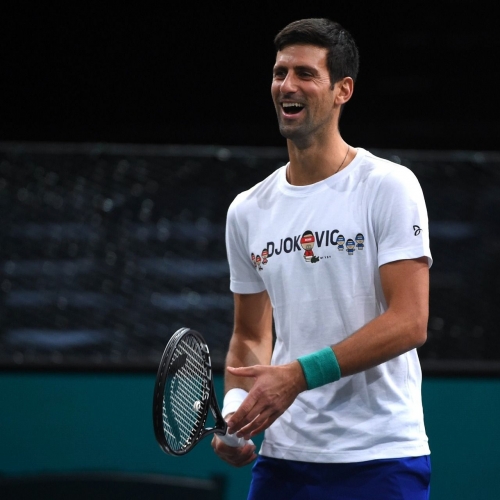 The Serbian was competing for the first time since July, when he won his 21st Grand Slam title at Wimbledon. However, he showed few signs of rust, striking his well-positioned groundstrokes against Tiafoe for the victory in just 73 minutes.

The American Tiafoe, who reached his first major semifinal at the U.S. Open earlier this month, teamed with compatriot Jack Sock to defeat Roger Federer and Rafael Nadal in the Swiss star's final match in career on Friday night.

After bidding a tearful goodbye to tennis, Federer came back and cheered up for his teammates at courtside, reports Xinhua. Djokovic quickly returned to the court for his win with Berrettini. It was their first time competing together.

"First time, but definitely not the last time, at least for me," Djokovic said. "I enjoyed it a lot. Perfect team, I guess. I don't play doubles as much, so it's a completely different game."

The Laver Cup, held from September 23 to 25 in London, is played between Team Europe and Team World. Each win secures one point on the opening day, while on the second matchday, two points, and on the final day, three points.

Team Europe have won all four previous editions of the Laver Cup.