Whither Taiwan Crisis: Will China go for an invasion?

New Delhi, Sep 24: Amidst an already frayed relationship between the United States and China, tensions are soaring over rapid developments in the Taiwan Strait since House Speaker Nancy Pelosi's visit to Taipei early last month prompting Beijing to carry on aggressive military drills, launching of missiles and other grey zone strategies like sending unmanned drones to Taiwan-controlled islands. 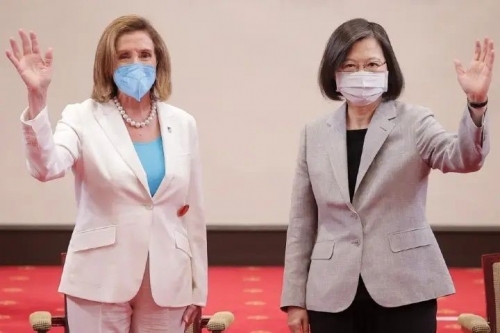 As demonstration of the US' commitment to a free and open Indo-Pacific, it had sent two Navy warships on August 27 to transit through Taiwan Strait as Pentagon increases the frequency of freedom of navigation operations. While the US sending warships in the Taiwan Straits is nothing new, Cruisers were sent for the first time highlighting the critical nature of the situation in the Taiwan Strait. Then on September 2, the US announced a new 1.1 billion arms package for Taiwan boosting its defences. China warned of countermeasures.

The package includes US $665 million for contractor support to maintain and upgrade a Raytheon early warning radar system in operation since 2013 that will warn Taiwan about an incoming attack. Taiwan will also spend about US $355 to buy 60 Harpoon II missiles which can track and sink incoming vessels if China launches an assault by water. The arms also include US $85.6 million for more than 100 Sidewinder missiles, a mainstay of Western militaries for their air-to-air fire power. China accused the US of interfering in internal affairs and asked to immediately revoke the arms sales.

The announcement of US arms sales came one day after Taiwan shot down an unidentified commercial drone amid a sudden spate of mysterious incursions. At the time of the shooting down Taiwan did not name China, even though it was quite sure it came from China. Now Taiwan's military has confirmed for the first time that the People's Liberation Army (PLA) flew drones across the median line that divides the Taiwan Strait.

The Defence Ministry said 45 PLA aircraft flew around Taiwan last Thursday, of which 25 crossed the median line, including a BT-100 unmanned aerial vehicle. It also confirmed that more drones had crossed the line on Friday and Saturday. On Monday, it said another PLA drone-identified as a BZK 007 had entered Taiwan's south-west air defence identification zone, a rare revelation of the model and its flight route.

Taiwan is naturally alarmed by the unprecedented Chinese military actions in the last one month and its defence ministry has presented a report to its Parliament where it maintained that Beijing has been simulating attacks on US navy ships and aiming to prevent foreign forces coming to Taiwan's aid. According to the report, China is strengthening its combat preparedness by focusing on the first island chain running from Japan through Taiwan, the Philippines and onto Borneo enclosing China's coastal seas and its suggests that China aims to gain strategic control of that island chain by 2035. China is now undermining Taiwan's morale and "force negotiations with a war", and "force a reunification on arms".

China could use special force or agents to "decapitate" Taiwan's command system and damage and infrastructure in an attack and capable of launching electronic attacks to disrupt communications and command systems as per the report dated September 1.

China could blockade Taiwan and cut off its energy supplies and economy, but at the same time noted that to carry on full invasion, Beijing still had transport and logistics constraints. To overcome those constraints, Beijing, however, had been drafting civilian transport ships for its annual amphibious drills to enhance logistic support for any Taiwan attack.

Looking at China's military capabilities which outnumber Taiwan's by many times, theoretically it is possible for Beijing to launch an attack on Taiwan. China has more troops, more missiles and more ships than Taiwan or its possible supporters, like the US or Japan could bring to a fight. Even compared to the US, China has certain advantages in the sphere of naval capabilities.

Beijing has 360 combat vessels as against America's 300 ships. China has the most advanced merchant fleet, a large Coast Guard and a maritime militia, fishing boats unofficially aligned with the military, giving it access to hundreds of additional vessels that could be used to transport the hundreds of thousands troops that China would need for an amphibious invasion. With all those resources if China is quite determined to attack Taiwan, it possibly can and even win a victory.

But will it go for an invasion, as the price of that victory would be bloody and dangerous for both Beijing and its adversaries. Some analysts believe that an invasion of Taiwan would be more dangerous and complex than the Allied D-day landings in France in World War II.

US government documents put the number of killed, injured and missing from both sides during the almost three-month-long Normandy campaign at almost half a million as far as the troops are concerned. And the civilian casualties could be even worse considering the density of population concentration of Taipei. Even with numerical advantages, considering the logistics constraints, Beijing will think quite hard and long whether an invasion is worth the overwhelming human cost.

An invading army and occupying force requires almost three times the number of soldiers than the defenders. "With a potential defending force of 450,000 Taiwanese today, China would need over 1.2 million soldiers (out of a total active force of more than 2 million) that would have to be transported in many thousands of ships," Howard Ullman, a former US Navy officer and Professor at the US Naval War College wrote in a February essay for the Atlantic Council.

According to his estimate, such an operation would take weeks and despite China's maritime strength, it simply "lacks" the military capability and capacity to launch a full-scale amphibious invasion of Taiwan for the foreseeable future.

Not only a huge number of troops but they would also need massive amounts of supplies to sustain those for an effective invasion. "For Beijing to have reasonable prospects of victory, the PLA (People's Liberation Army) would have to move thousands of tanks, artillery guns, armored personnel vehicles, and rocket launchers with the troops. Mountains of equipment and lakes of fuel would have to cross with them," Ian Easton, a senior director at the Project 2049 Institute wrote in The Diplomat last year. For a country which has not seen a war since 1979, organising such an operation is not only difficult but almost near impossible.

"The thought about China invading Taiwan, that's a massacre for the Chinese navy," according to Phillips O'Brien, Professor of Strategic Studies at the University of St. Andrews in Scotland. O'Brien argues that Taiwan has been stocking up on land-based anti-ship missiles similar to the Neptunes, used by Ukraine to sink Russian cruiser Moskva in the Black Sea in April. "Taiwan is mass producing these things and they're small, it's not like (China) can take them all out," to quote O'Brien. He further points out "What's cheap is a surface-to-ship missile, what's expensive is a ship."

More importantly, an invasion of Taiwan would not be limited to a war between China and Taiwan but would automatically involve the US and Japan, as both have a stake in the security of Taiwan. China gaining control over Taiwan would not only give a huge boost to Xi Jinping's China dream but would also provide Beijing with an access to the Pacific. It will also boost China's impressive economy. For the US, it will be a complete loss of face. Allies will think that Washington cannot be trusted to defend them against adversaries.

Washington will suffer its heaviest geopolitical and economic defeat not just regionally but globally. For Japan it would be an existential problem and force it to adopt counter-strike capabilities, which it has started initiating, as reflected in the decisions taken at the 2+2 dialogue held recently in Tokyo between India and Japan. While the US still continues with its ambiguity regarding Taiwan - affirming a One China Policy and at the same time vowing to defend it.

President Biden has mentioned a number of times that he would defend Taiwan in case of a Chinese attack. That's another matter that his White House staff tried to emphasise Washington's ambiguous position of the One China Policy and support for the status quo. Notwithstanding the ambiguity, geo-political and economic reasons will compel the US to defend Taiwan in case of an invasion. So will Japan with whatever resources it can chip in. A situation of war will also have a serious effect on the Chinese economy not only because of drastic economic sanctions from the West but also because of the collapse of Taiwanese economy that sustains the world's semi-conductor industry.

Under the circumstances, China is less likely to take resort to an invasion of Taiwan unless it is forced to do so if the latter declares independence-a red line for Beijing. Short of an invasion, China will do everything to intimidate Taiwan and further intensify its pressure to refrain it from undertaking any measures that go against the interests of Beijing.

To ensure Taipei does not cross the threshold, Beijing will also continue with its current military drills from time to time and launch missiles that will go over the Taiwanese airspace reaching Japanese territorial waterways as it happened last month. Rather than the conventional path, China will now use more of electronic and cyber warfare to disrupt Taiwanese command and control system. Taiwan will have to get used to this new normal and become extremely cautious not to provoke China that compels it to go for an invasion or other extreme measures.

China will also try its level best to change the power balance within Taiwanese politics. The 16th Presidential and Vice-Presidential elections in Taiwan are scheduled for early 2024. Incumbent President Tsai Ing-wen of the Democratic Progressive Party (DPP), who was reeled in 2024 is ineligible to seek a third term. DPP is considered to be a pro-independence party while the country's main opposition party (KMT) does not seek total independence of Taiwan. Beijing will aim to see a new President which is definitely not from the DPP, but possibly from the KMT and supported by the Chinese Unification Promotion Party, or the Unionist Party.

Looking at the current situation in Taiwan, there is by and large anti-Chinese feeling within the country after the escalation of conflict following Pelosi's visit and the uncertain security-economic situation created as a result of that. Whether China will succeed in its attempt to change the political equation within Taiwan will depend on how the crisis unfolds in the coming two years. But Beijing will no doubt continue to strive for that goal.

(The content is being carried under an arrangement with indianarrative.com)

Whither Taiwan Crisis: Will China go for an invasion?