Despite success of Project Tiger, national animal fights for survival

Jaipur, Sep 24: Do you know India once had 1,00,000 tigers? Over the years, this number kept dwindling as Britishers and the erstwhile maharajas took up hunting.

Meanwhile, no comprehensive law was in place to look after the wildlife till the 1960s even as widespread hunting of tigers was reported all over India, says wildlife expert Harshwardhan. 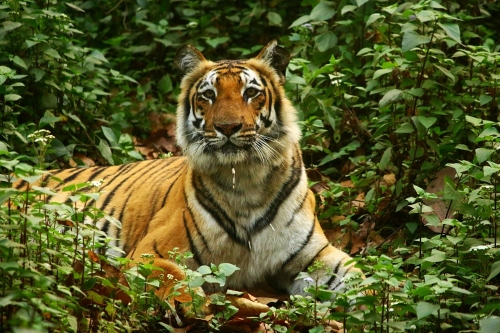 Queen Elizabeth II of Britain along with her consort, Prince Phillip, who visited Ranthambore in the early 60s reportedly to hunt tigers, was hosted royally by the then government, he said.

Then came Project Tiger (PT) in 1973 where the WWF-International assumed a lead role and clueless forest officers adopted a fudging tactic to show increasing tiger numbers.

Even now, things have not changed and the tiger faces yet another challenge -- its forest cover is shrinking thereby increasing man-animal conflict.

Almost 10-15 tigers and tigresses are roaming outside almost all the best breeding reserves in India as dominant males do not allow newly-born, young and sub-adult males to remain inside the park, he added.

These vagrant tigers face tough challenges in their newly adopted 'homes' which are people by villagers and their livestock.

Further, tiger corridors are missing. The outcome many tigers are killed by the villagers, or get knocked down in road accidents and mishaps.

In fact, Rajasthan famous for its tigers and jungle safaris, is in the news these days for the skewed gender ratio, tigers' fight for survival and missing tigers reports.

While four out of these 13 tigers were old, it is possible that the others may have died naturally, fled from their territory due to high density of tigers or died in territorial clashes with other tigers, it said.

In its reply, the government said that due to the increase in their population and density around Ranthambore, more cases relating to missing tigers, territorial fights between tigers and deaths have surfaced.

The ratio between male and female tigers in RTR is 11.3, which is unnatural. Most of the tigers, out of the 32 females, at present in the breeding age have also contributed to an increased population, the data said.

"The tiger population has increased in Ranthambore and we have already passed the carrying capacity. There are around 55 mature tigers while as per our carrying capacity, we have space for around 40-45 mature tigers only. As a result of this overpopulation, tigers migrate or end up fighting with other tigers in territorial battles," said a senior forest official.

PS Somashekar, a retired forest officer from Rajasthan said, "We might see the big cat numbers growing, but in reality, we are losing the battle."

"There was a time when the stories of man-animal coexistence sounded real. This was in the 70s and 80s but now it is a thing of the past. The development of areas around jungles, four-lane highways, electricity, sound of bikes and jeeps many a times prompt these animals to come out of their peripheries."

As the tiger is a carnivore, it needs regular movement from one area to another, however, we have created obstructions in its movement area, he said.

"The government land has been converted into agricultural land, agricultural land into commercial land and so on. Hence when the animal moves into corridor areas, it gets confused on seeing four-lane highways, dazzling lights and sounds, leading to conflict," Somashekar said.

Despite success of Project Tiger, national animal fights for survival