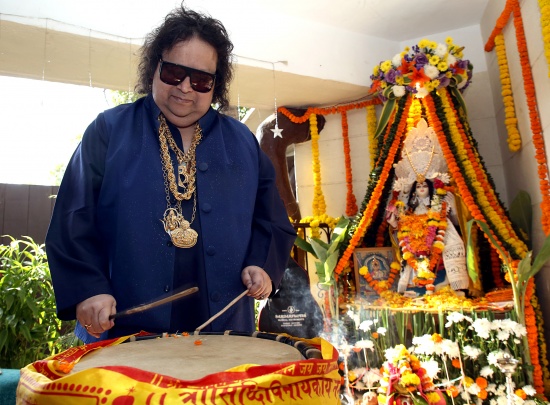 The stars may fade out due to reasons like age, change of trend, and other such factors (Column @B Town 24.5.20). Some stage a comeback in character roles. But, what happens when a music composer loses favour with makers? His talent is supposed to be inherent, not time bound.

Take for example the composer RD Burman. He was considered the wizard of new sounds and, when it came to composing for film, he was equally at ease with films that needed youthful racy numbers or the classical-based traditional, melody.

He was a kind of child prodigy composing songs at an early age which his father, SD Burman, did use in his films. It was as if filmmakers were waiting for him to grow up and, with SD Burman's ill health and eventual demise, he also inherited some makers to score music for. Comedian Mehmood, who had approached SD Burman to score music for his film, ended up signing up RD Burman, just 21 or so at that time, for his film, "Chhote Nawab" (1961). His success story started with "Teesri Manzil" (1963), followed by a glorious run of successive musical hits. That was till the very producer who had given him his major break in "Teesri Manzil", Nasir Hussain, dropped him after consecutive mediocre scores in his films, "Zamane Ko Dikhana Hai" and "Manzil Manzil". Other films committed to him by a couple of big makers went to other composers.

To think that a composer who could score such a variety of music for films like "Teesri Manzil", "Kudrat", "Kati Patang", "Jawani Diwani" or "Hare Rama Hare Krishna", suddenly had no takers. But, few realised that for a genius that he was, this average musical score for a period was just a passing phase in RD's life.

For RD Burman had the last word on his capabilities, as before he passed away, his last soundtrack was for "1942 A Love Story", a chartbuster, his parting gift to remember him by.

The film industry, believing only in chasing success, went after new lad on the block, Bappi Lahiri.

Bappi Lahiri, I would call him, the biggest distraction that happened in the film music scene. He churned out numbers by the hour and that was his claim to fame that 'today I recorded x number of songs'. The era of 'sittings' -- where a lyric writer and music composers along with a few musicians sat together and worked on a song, its tune, orchestration and so on before a song was finally recorded in a studio -- was over. With Lahiri, it was instant delivery. He had a huge South Indian clientele who shot a film in one or two schedules and they had no time to visit Mumbai to discuss a song. Everything was done on phone. They were always in a hurry to shoot the songs and Lahiri suited their style.

With this phase, melody went out of fashion. Lahiri's songs may be dance worthy and fun while watching a film but lacked lasting value.

Thereafter, a few music directors did shine but none of them had it in them to give an all-hit album. One or two songs at best that one could find in their music.

Laxmikant-Pyarelal was a duo that started off as musicians playing for recordings of many other music directors till they came together to form a team. Starting with a costume drama, "Parasmani", followed by Rajshri Production's "Dosti", they had arrived. There came a time when they were scoring music for just about every famous banner's films. The pair was the best thing that had happened to the Hindi film industry during 1960s till 1998, the year Laxmikant passed away.

But, what accounts for the exit of composer, Naushad? He ruled the Hindi film music scene since long before Shankar-Jaikishan, Laxmikant-Pyarelal, RD Burman and Kalyanji-Anandji came on the scene prominently. Naushad was the most saleable and hence, the most sought-after music director for most top banners. But, his songs composed for films mid 1960s onwards, lacked the same appeal as his earlier work. Major filmmakers were not coming to him anymore.

So how and why does a music composer like Naushad, who was a talent bank with music in his bones, is well endowed with the Classical Ragas, go out of favour with the filmmakers?

Rajiv Vijayakar, a keen follower of the film music scene, has answer for that. To put it in a nutshell, he gives the example of the music maestro Naushad, who was a go-to man for many filmmakers. He ruled the music scene but, with the arrival of Shankar-Jaikishan, the style of music changed. As Vijayakar puts it Naushad's "Andaz" and Shanakar-Jaikishan's "Barsat" released close to each other in the same year. And, "Barsat" music proved to be a bigger hit.

The duo, Shankar-Jaikishan, more than changing the way singers sang, changed the entire style of compositions, arrangements and sound. According to him, while Mukesh sounded like copying KL Saigal in "Andaz", in "Barsat" he was the Mukesh the music lovers came to love for ever.

The top singers had to adapt to the new way of singing and composing as did the other music composers with the arrival of Shankar-Jaikishan.

Vijayakar, who is presently working on a book on the composer duo, Laxmikant-Pyarelal, has a say on the cause of many music composers fading out. But, that would take a book on the subject. According to him, some fell prey to their attitude. And, quite a few faded away because they did not have much depth. They were a flash in the pan. (Vijayakar already has three published books to his credit "The History Of Indian Film Music", "Dharmendra Not Just A He-Man" and "Main Shayar Toh Nahin").

A lot of things have passed as film music since the maestros' days, and noisemakers took over. AR Rahman arrived with a bang on the music scene and, as is usual, quite a few filmmakers made a beeline for him. But, his style was such that lyric could hardly be discernible in his songs. It was so heavy on instrumentals.

Sadly, music, once a crowdpuller for films, has now lost its value. The films still have songs, but more often than not, they are forced in, used in unlikely places and as fillers. Romantic songs, which went on to become evergreen, are rare in films now. As a result of this, there are no lip-synched songs.

In recent times, songs of only one film have ruled the waves the songs of "Kesari", released 14 months back.

(Vinod Mirani is a veteran film writer and box office analyst. The views expressed are personal)

Like This Article?
Music may be evergreen, composers are not