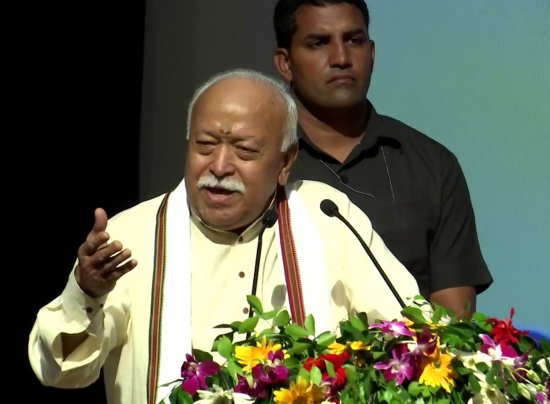 Bareilly , Jan 19 : Rashtriya Swayamsewak Sangh (RSS) chief Mohan Bhagwat said on Sunday that when RSS workers say that this country belongs to Hindus, they imply that 130 crore people in the country are Hindus.


"By saying that all are Hindus, we do not want to change anyone's religion, language or caste... We do not want any power centre other than the Constitution because we believe in it. Hindutva is a holistic approach and we believe that the ancestors of all were Hindus. This is unity in diversity and is marked by emotional integrity," he said while speaking at a function in Bareilly on Sunday.

Bhagwat said that the country was run by the Constitution which envisages a bright future for the nation.

"If you read the Constitution, you will realize that every page is an inspiration for the country. The Constitution tells us our beginning and our goals," he said.

He said that we need to learn from Israel which has fought for its freedom and is one of the leading countries in the world today.

The RSS chief also clarified the confusion over his statement on population control and said, "I only said that population is a problem as well as resource, so a policy should be drafted in this regard. The policy will decide how many children one should have. I did not lay down any rule as such because it is not my job."

Like This Article?
Country belongs to Hindus: Mohan Bhagwat