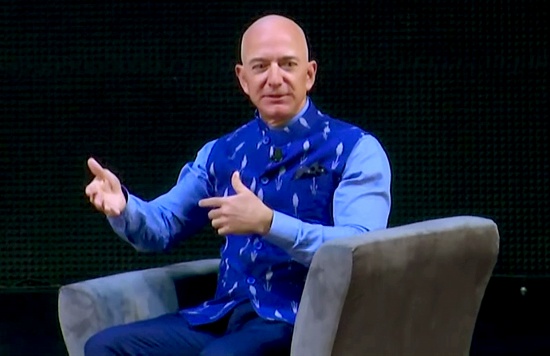 Mumbai, Jan 17 : Amazon CEO Jeff Bezos feels his trip to India started off on the right note with kites, and says he felt honoured to be able to lay a wreath on the memorial of Father of the Nation Mahatma Gandhi at Raj Ghat in Delhi.

From dressing in 'desi' attire to spending time with some kids to showing off his kite-flying skills on the occasion of Makar Sankranti, Bezos made the most of his India trip. He looked back at the time spent in the country during a conversation with superstar Shah Rukh Khan and filmmaker Zoya Akhtar at a glitzy Amazo Prime Video event here.

"Kite flying was fun Any day when you get fly kite is a good day.. My trip to India started off on the right note with kites," Bezos said.

Asked about his experience at the Raj Ghat, he said "It was very peaceful. He truly changed the world and taught us the principle of non-violence. It was a great honour to be there and lay a wreath."

When SRK asked if Mahatma Gandhi's teaching still relevant, Bezos said "It will be relevant forever..They are true but somehow very hard to achieve."

Bezos, who is ranked amongst top most global billionaires, was on a three-day India visit starting from Tuesday. He has been to India several times, and has noticed one thing about the country.

"I noticed certain things that seem to me to be the same. There is so much energy, colour, full of life, and everywhere you go, there is so much diversity...Every time I come here, I find that the people that I talked to, are focused on and interested in being better tomorrow than they are today. Everybody here seems to be focused on self improvement. So, when I come here I get a boost of energy," he said.

Be in its India slate or global line-up, Amazon has diverse projects added to its library. Bezos says the aim is to make it a 'talent friendly" studio.

"I think this is a golden age of television. There are really good TV series in terms of quality of the very best movies. Now, the best storytellers are coming to TV. You're getting the best actors in television. This is one of those businesses where the viewer always look for something a little fresh, so you can never find formula. As soon as you find a formula, it's not fresh," he said.

Bezos continued "I want us to be known as the most talent friendly studio in the world. And the reason at the end of the day is that it is the talent that makes those stories. Storytelling is the oldest thing that we've been doing it."

"It is one of the hardest things that humans do is tell riveting inspiring stories," he added.

Bezos also announced that they have decided to double down the investment for the streaming service in the country. The evening wrapped up with a soulful Sufi performance by music maestro AR Rahman.

(Sugandha Rawal is in Mumbai on an invitation by Amazon Prime Video. She can be contacted at [email protected])