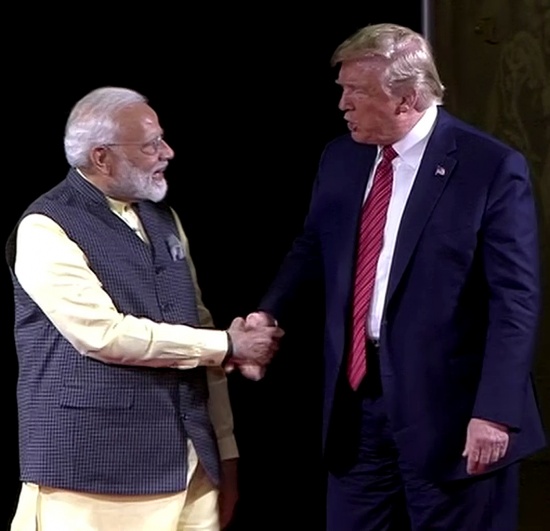 "I want to thank Prime Minister Modi of India for allowing us to have what we requested from before the problem arose and he was terrific," Trump said at his nationally televised news briefing on Wednesday.

"We will remember it," he added.

This was his second expression of gratitude. Earlier he had tweeted "Extraordinary times require even closer cooperation between friends. Thank you India and the Indian people for the decision on HCQ. Will not be forgotten! Thank you Prime Minister Narendra Modi for your strong leadership in helping not just India, but humanity, in this fight."

The expression of thanks by Trump marks acknowledgement before the world of India as a pharmaceutical powerhouse and a source of humanitarian assistance, even if that rankles some in the Indian and US media and politics.

Despite a media campaign against use of HCQ, Trump has advocated trying it as a therapy against COVID-19 as the number of cases in the US was racing towards the half-million mark, with 31,503 cases reported by Wednesday night, taking the tally to 431,838.

Most of the mainstream media has made it a partisan issue against Trump even calling HCQ "dangerous", even though the Democratic Governor of New York, Andrew Cuomo, was the first to request it for a trial with 1,100 patients.

A Democratic state Representative from Michigan, Karen Whitsett, has publicly said that HCQ saved her life and thanked Trump for bringing attention to it.

A reporter tried on Monday to muddy the waters for both the US and India by falsely claiming that New Delhi was imposing the ban on HCQ exports as a retaliation for Trump's restrictions on export of gloves, gowns and masks.

India had, contrary to his claim, banned the HCQ exports on March 25, nine days before Trump's restrictions on exports of protective gear, which India does not import from the US, and if at all in any significant quantity.

Moreover, hours before the reporter asked the question, media had reported that a decision had been taken to release the HCQ that India had ordered before the coronavirus pandemic crisis arose.

Trump was surprised by the question and said "I didn't hear that that was his decision."

"I spoke to him yesterday. We had a very good talk. And we'll see whether or not that is. I would be surprised if he would, you know, because India does very well with the US.

"If he doesn't allow it to come out, that would be okay, but, of course, there may be retaliation," the President added.

Meanwhile, sections of Indian media and politics also joined the fray and ignoring the sequence of events and the falsity of the reporter's claim, accusing Modi of giving in to "threats" and of potentially shortchanging the country.

Trump at his Wednesday news briefing underscored that India was "allowing us to have what we requested from before the problem arose" - and not a fresh order.

Moreover, India has also agreed to release HCQ to Brazil, a country with which New Delhi has close ties. Both countries are members of the IBSA forum for diplomatic and economic cooperation along with South Africa.

Further reinforcing India's role as a country strong enough to help others, External Affairs Ministry spokesperson Anurag Srivastava said "In view of the humanitarian aspects of the pandemic, it has been decided that India would licence paracetamol and hydroxychloroquine in appropriate quantities to all our neighbouring countries who are dependent on our capabilities. We will also be supplying these essential drugs to some nations who have been particularly badly affected by the pandemic."

While rigorous clinical trials with control groups was underway at the University of Minnesota and elsewhere to test its efficacy as a preventive and as a therapy, two small studies in France and China have reportedly shown it can reduce the impact of COVID-19 in patients.

The chief medical scientist on the White House Coronavirus Task Force, Anthony Fauci, has said that while there was no strict proof with clinical trials of HCQ, doctors can prescribe it.

Trump has been saying that HCQ in combination with Azithromycin could be a therapy based on what he has heard, and on Wednesday said that adding zinc to that has been suggested.

"I may even take it" as a preventive, he added.

Even if it does not prove ultimately to be effective, there is nothing to lose by trying it when other therapies are not available and its safety has been already proven in decades of use against malaria, he said.

(Arul Louis can be contacted at arul.l@ians.in and followed on Twitter @arulouis)

Like This Article?
Trump thanks Modi twice for allowing pre-ordered HCQ export