Scores of shikaras on Dal lake without any work 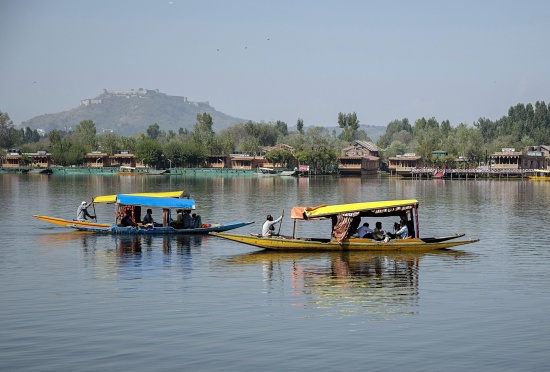 Srinagar, Feb 27 : Bashir Ahmad, a shikara operator on the Dal Lake says he is finished. Every day he goes to the lake with his boat in the hope of finding some work but returns home in the evening empty handed without finding a single customer.


Life on the picturesque Dal Lake has come to a standstill as Shikaras are empty and parked along the edges of the lake. In the months leading to the abrogation of Article 370 on August 5, 2019, the Dal Lake was bustling with tourists going for boat rides in large numbers. But houseboats are vacant nowadays. There are no tourists and there is no business.

"Situation is very bad, shikara operators have no work, we are all jobless," Ahmad said. "We have hardly earned anything in the last seven years, we are requesting tourists to return to Kashmir."

Bashir says 2000 Shikaras ply on the Dal lake but there is hardly any work these days. With tourism showing no signs of revival, most have changed jobs.

And it is not just the boat men. On the other side of the lake, at the tourist taxi stand, taxi drivers are equally worried. More than 200 taxis operate out of Taxi Stand on Srinagar's boulevard road, most without work since August 5.

"We have to pay back our bank loans, that is what is worrying us," Nazir Ahmad, Vice president of the tourist taxi stand said. "We have retrenched ninety per cent of the drivers because our earnings are zero."

Tourism is the backbone of Kashmir's economy. Hundreds of thousands of people associated with hospitality and tourism industry have been affected by the ongoing situation in Kashmir. Government issued an advisory on August 2 asking all the tourists and Amarnath pilgrims to leave Kashmir.

"The tourist inflow was good before August 5 and we were hoping that it will improve further but after the abrogation of article 370, there was a clampdown the government also issued advisory asking tourists to leave which has greatly impacted the tourism sector," said Manzoor Ahmad Pakhtoon, Chairman Jammu and Kashmir Tourism Alliance. "We are trying for its revival but there are no signs of its revival so far."

Like This Article?
Scores of shikaras on Dal lake without any work