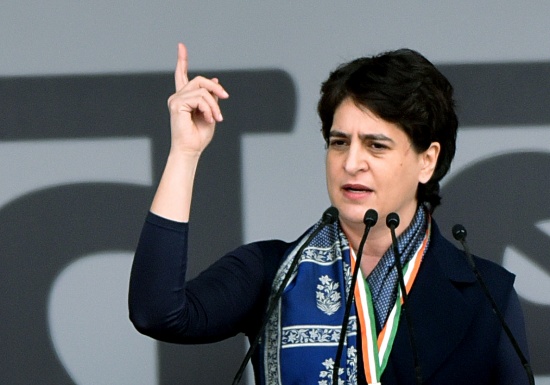 New Delhi, Feb 16 : A purported video has been leaked online about the December 15 Jamia incident that shows men in uniform beating up students inside a library. Not just social media but political reactions have also started pouring in since early Sunday.


The video has been shared by many, including the Jamia Coordination Committee of the protesting students and the teachers.

The Twitter handle of the Jamia Millia Islamia said "Watch this and realise what kind of trauma and brutality the JMI students faced at the hands of the Delhi Police.. students have been brutalised for no fault."

Congress General Secretary Priyanka Gandhi Vadra also tweeted the video and wrote "See how Delhi Police is thrashing the students. One boy is showing his book, but the policeman is beating him. Union Home Minister and Delhi Police have lied that they did not enter the library. After watching this video, if no action is taken, then the motive of this government is exposed before the country."

In the video, men in uniform are seen entering the library that students say is the Old Reading Hall of the M.A/M.Phill Section and beating the students, who were sitting and studying.

On December 15, just days after the Citizenship Bill was passed students and locals while taking out an anti-CAA protest rally had gone on a rampage and burnt buses, after which the police resorted to lathi-charge, Delhi Police had said.

The case has been with the Crime Branch of the Delhi Police.

The University had approached the police for filing an FIR against the erring police personnel responsible for the brutality. The Jamia Millia Islamia administration had also filed a case in the court of the Metropolitan Magistrate, who has directed the Delhi Police to file action taken report by March 16.