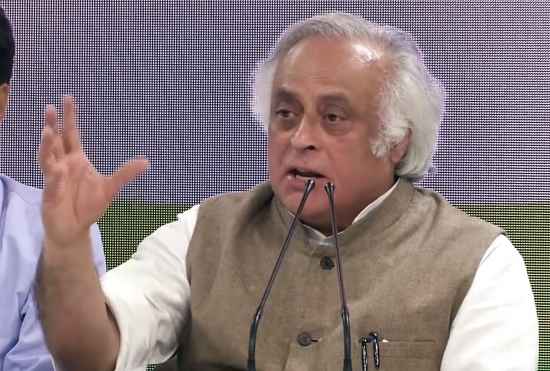 New Delhi, Feb 14 : Senior Congress leader and former Union Minister Jairam Ramesh has found an unlikely ally in the Vishwa Hindu Parishad. The VHP has thrown its weight behind Ramesh after he blamed consumption of beef as a reason behind global warming.


VHP Spokesperson Vinod Bansal tweeted "Wish Congress and its allies listened to this important advice of Shri Jairam Ramesh. Then, both Gaumata and the country would have been safe!!"

Backing Ramesh, VHP's Bansal claimed "He had raised the same voice in a UN forum in 2009 too. He said that 'The solution to cut emissions is to stop eating beef'."

This statement comes against the backdrop of the former Union Environment Minister advocating a turn to becoming vegetarian in order to check global warming. Ramesh warned "If you want to do something for global warming, become a vegetarian. Because I think the beef industry has been a huge culprit in global warming."

The Congress has never taken such a strong anti-beef stand in public. In fact, in 2017, Youth Congress leader Rijil Makkutty, along with two others, were alleged to have caught slaughtering an ox in public view in Kerala. It was a mark of protest against the Centre banning sales of cattle for slaughter.

Like This Article?
After opposing beef, Jairam Ramesh finds ally in VHP