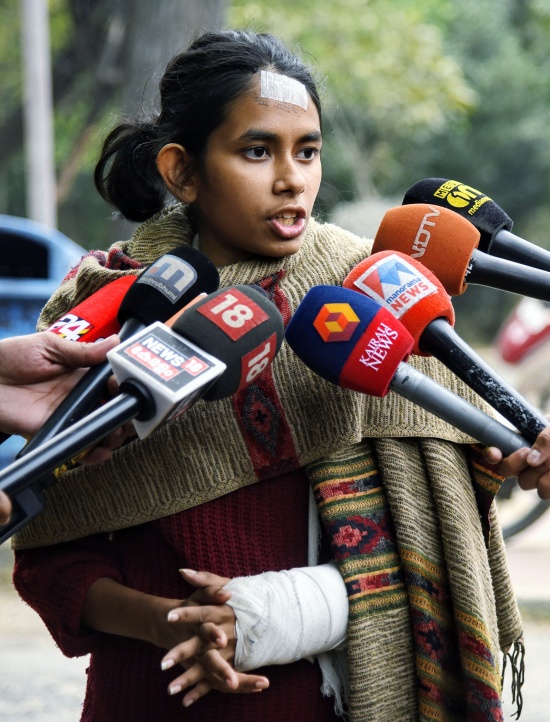 Kolkata, Feb 14 : JNU Students Union (JNUSU) president and SFI leader Aishe Ghosh was on Thursday not given permission to hold a meeting inside Calcutta University by the authorities and had to address students outside the campus gate.


There was altercation between the students and the university staff as the gate was shut a little while before Ghosh was set to address a gathering called under the platform Students Against Fascism.

The authorities, however, said neither permission was sought for the meeting nor it was a convention to let outsiders to hold political programme in the campus.

Ghosh, however, said permission had been taken in advance, but it was cancelled after the authorities got to know she would be among the speakers.

In a stinging speech, Ghosh said the struggle against the black law Citizenship (Amendment) Act, National Population Register and National Register of Citizens would continue till they were scrapped.

"This is the time to look into the eyes of the RSS and the BJP and tell them that we don't and won't accept their brand of politics," she said.

Ghose said everybody would have to fight together as a long struggle likes ahead.

Referring to West Bengal, she said it is her place of birth and she won't allow anybody to do divisive politics in the name of religion. "We won't allow any division between man and man. The BJP and RSS were trying to foment riots in Bengal. We have to uproot this politics".

Ghosh later spearheaded a rally from College Street to Shyambazar.

Several members of the civil society including theatre personality Chandan Sen, film directors Aneek Dutta and Tarun Majumdar were in the forefront of what was christened "Janaganamana rally".

Thousands of students and youths carrying the national flag and raising slogans against the BJP took part of the rally.

Like This Article?
Aishe Ghosh denied permission to hold meeting in CU