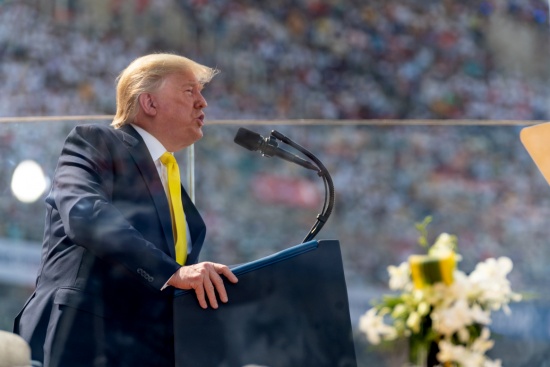 Washington , September 17: Despite Robert Redfield, the director of the US Centers for Disease Control and Prevention, saying that wearing a mask would be more effective than a vaccine against the coronavirus, President Donald Trump said that the mask is ot more effective than the vaccine y any means.

"I might even go so far as to say that this face mask is more guaranteed to protect me against COVID than when I take a COVID vaccine because the immunogenicity maybe 70 per cent. And if I don't get an immune response, the vaccine is not going to protect me. This face mask will," Redfield said at a public testimony according to CNN.

Trump said, "It is not more effective -- by any means -- than a vaccine. I called him about that. If you would ask him, he would say that he did not understand the question. Masks have problems too -- they need to be handled carefully," Trump told reporters here.

He added, "The vaccine is much more effective than a mask. The mask is not as important as the vaccine. The mask perhaps helps. A lot of people did not like the concept of (wearing a) mask."

Trump further said that Redfield told him that he (CDC director) answered the question incorrectly while he was at a public testimony. He further said that he hoped that the vaccine "is a lot more" beneficial than the mask.

"As far as the mask is concerned, he made a mistake," Trump said and added, "The vaccine is going to have tremendous power. It's going to be extremely strong, successful. We are not going to have a problem. The mask may help, but the mask is a mixed bag."