Netanyahu thanks Trump for standing by Israel's side, boldly confronting 'tyrants' of Tehran' 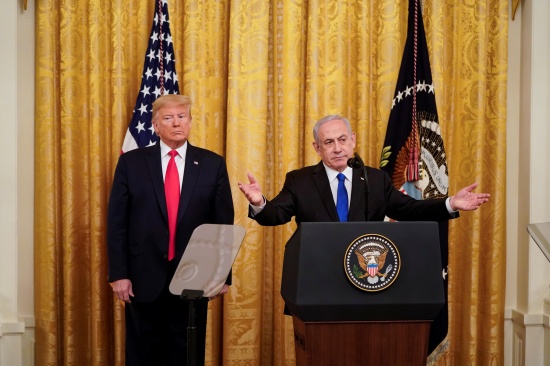 Washington , September 16: Calling Abraham Accord a 'historic' peace deal, Israeli Prime Minister Benjamin Netanyahu on Wednesday thanked United States President Donald Trump for 'unequivocally' standing by Israel's side and for oldly confronting what he called the yrants of Tehran.

"Thank you, President Trump. You have unequivocally stood by Israel's side and boldly confronted the tyrants of Tehran. You've proposed a realistic vision for peace between Israel and the Palestinians. And you have successfully brokered the historic peace that we are signing today," Netanyahu tweeted.

Netanyahu's praise of the US President comes after the signing ceremony at the White House to establish the foundation of the peace agreements between Israel, Bahrain and the United Arab Emirates. Trump presided over the ground-breaking ceremony.

According to the Abraham Accord signed by the two Gulf countries -- Bahrain and UAE-- they have now joined Egypt and Jordan as the only Arab nations to have full relations with Israel.

After the signing of the Abraham Accord by Israeli Prime Minister Benjamin Netanyahu, Bahrain's foreign minister Abdullatif bin Rashid Al Zayani and Crown Prince Mohammed bin Zayed of the UAE, Trump called on other Arab and Muslim nations to follow the UAE's lead.

The three copies of the Abraham Accord were signed by each representative in English, Arabic and Hebrew.

Netanyahu thanks Trump for standing by Israel's side, boldly confronting 'tyrants' of Tehran'