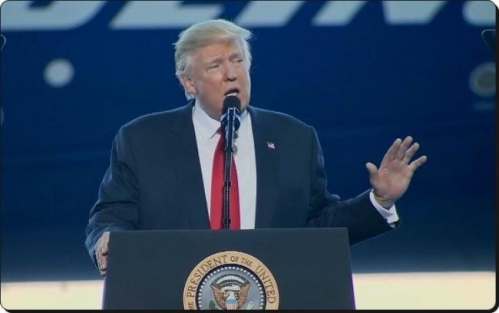 Washington, Aug 14 : US President Donald Trump said that he plans to deliver his convention speech while formally accepting the Republican presidential nomination from the White House lawn, according to media reports.

"I'll probably be giving my speech at the White House because it is a great place. It's a place that makes me feel good. It makes the country feel good," Xinhua news agency quoted Trump as saying to the New York Post in an exclusive interview on Thursday.

Earlier this week, he had floated the idea of giving the speech at either the White House or Gettysburg, Pennsylvania, an American Civil War battlefield.

Trump told the New York Post that he would visit Gettysburg at a later date.

"We'd do it possibly outside on one of the lawns. We have various lawns, so we could have it outside," he said, citing the ongoing coronavirus pandemic as a reason.

Trump's intent to give the speech at the White House triggered criticism from the Democrats, who said it would be both illegal and unethical for the President to do so.

"Whether it's legally wrong or ethically out of the question, it shouldn't even have been something that was expressed," House Speaker Nancy Pelosi said.

"For the President of the US to degrade once again the White House, as he has done over and over again by saying he's going to completely politicize it, is something that should be rejected right out of hand," she added.

The pandemic, which has infected over 5 million people and killed more than 160,000 in the US, has forced the Republican Party to scale back its national convention, scheduled for August 24-27, by moving most of the activities to be held online, while only some in-person business meetings will take place in Charlotte, North Carolina.

Trump scrapped the part of the Republican National Convention in Jacksonville, Florida, due to skyrocketing COVID-19 caseloads in the state.

He originally planned to give the acceptance speech there on the last day of the convention.

The President still insisted on having a big crowd of supporters at his speech, telling the New York Post that "it's very big, a very big lawn. We could have a big group of people".