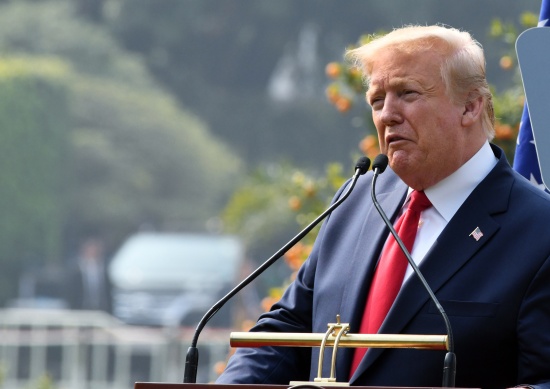 Washington, Aug 14 : President Donald Trump has said that he opposes funds for the US Postal Service because it would boost mail-in voting he alleges would favour Democrats.

Trump has previously claimed that mail-in voting would hurt his campaign, which polls show to be in a tight race with Democratic candidate Joe Biden, the BBC reported.

Democrats denounced Trump's comment, saying his position is an attempt to prevent Americans from voting him out.

A record number of people are expected to vote by mail due to the pandemic.

On Wednesday, Trump told reporters he refused to sign off on $25bn (£19bn) in emergency funding for the Postal Service or $3.5bn for election security due to the high price tag.

Trump has repeatedly condemned mail-in voting as an opportunity for fraud and election interference.

On Thursday, he said his reason for blocking the funds was due to his opposition to mail-in ballots.

"They want $3.5bn for something that will turn out to be fraudulent. That's election money, basically," Trump said in a telephone interview with Fox Business Network.

"Now they need that money in order to make the post office work so it can take all of these millions and millions of ballots," he continued.

Despite Trump's claims, there is little evidence that mail-in voting - which the US military uses - is rife with fraud or that it favours one political party more than another.

A spokesman for Biden condemned the comment, saying "The president of the United States is sabotaging a basic service that hundreds of millions of people rely upon, cutting a critical lifeline for rural economies and for delivery of medicines, because he wants to deprive Americans of their fundamental right to vote safely during the most catastrophic public health crisis in over 100 years."

"This is an assault on our democracy and economy by a desperate man who's terrified that the American people will force him to confront what he's done everything in his power to escape for months - responsibility for his own actions," added spokesman Andrew Bates.

The US postal system is currently experiencing a slowdown in mail deliveries, which critics say is due to policies put in place by Trump's selection to run the service.

Postmaster General Louis DeJoy, who donated millions to Mr Trump's campaign and to other Republicans, has been accused of deliberately undermining public confidence in the service to deter people from mail-in voting.

DeJoy is the first postmaster general in 20 years to not be appointed from within the agency's own ranks.

Had a hectic week? Just 10 minutes of massage will relax you