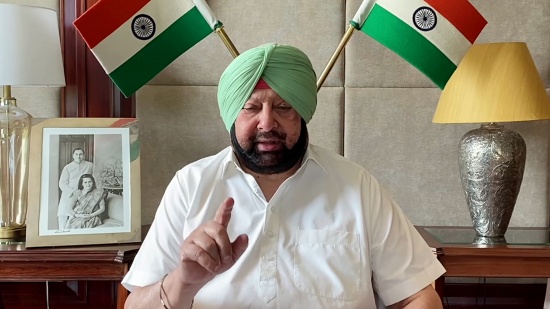 Chandigarh , Aug 12 : Punjab is offering the best ecosystem which includes Single Window Clearance System, Cheapest Power, Skilled Talent and Infrastructure to welcome the industry in the state, which will result in generation of more job opportunities for our youth, said Capt Amarinder Singh, Chief Minister, Punjab.

The Chief Minister was addressing to the group of industry leaders during the Chandigarh University Industry Meet (Virtual Meet). The theme of the Virtual Meet was 'Revival of Economy in the post-COVID-19 scenario.' Industry leaders showed great interest in investing in Punjab and take leverage of the Ease of Doing Business and Industry-friendly environment of the state during the Chandigarh University Industry Meet 2020.

Chief Minister, Capt Amarinder Singh assured the Industry to work in the direction of meeting the expectations of the corporate world and look into the resolutions of the problems if any.

"The government has already appointed a high-level committee under economist Montek Singh Ahluwalia to develop a medium- to long-term recovery strategy for the state from the impact of the COVID-19 lockdown," said Capt. Amarinder Singh, while referring to some of the measures adopted by Government of Punjab to bring the economy back on track.

Chief Minister patiently listened to the ideas and suggestions given by the corporate leaders representing the industry from different sectors.

"It is remarkable that due to concussive and business friendly environment of Punjab, top industry has shown interest in coming to the state of Punjab and Chandigarh University will act as bridge between Government and Industry to felicitate the establishment of new industry in the state," said Satnam Singh Sandhu, Chancellor, Chandigarh University. "The University has the best of talent, world class infrastructure, research and incubation facilities which we have offered to the Industry and we will surely make Punjab the next Knowledge and Industry hub of the region," added Sandhu.

"With big corporate houses setting-up their units in Mohali, the city is emerging as the next education and technology hub of the region and this will largely benefit the youth of Punjab as new job opportunities will be generated for them," said Chief Minister.

"Government is working to invite corporate to Punjab and has started Invest Punjab program three years back in 2017 and today the success of the Invest Punjab program can be checked on ground with more Rs 65,000 crores worth of investment has already been done in the state with top notch companies setting-up their units," further added Capt Amarinder Singh.

"Government is pushing industrial growth in the state with 3100 acres of 4 Industrial Parks coming up in Punjab at Bathinda, Sangrur, Rajpura, Hoshiarpur which will work as integrated manufacturing clusters in different domains," added the Chief Minister.

"There was a time when India faced food shortage but our farmers stood up to the challenge and within four years, through green revolution Punjab richly contributed in making our country self-sufficient in food grains. Now it is the turn to bring technology revolution and once again Punjab will become the front-runner in this," said Capt Amarinder Singh.

"Punjab is doing great in the terms of crop-diversification as we have shifted from Paddy to Basmati which has great export opportunity. In addition we have increased the area under Cotton Production by 105 lakh acres this year and we are trying to move Punjab out to Paddy and Wheat belt," said CM Punjab, on the front of agriculture,

"To improve the accessibility of quality medical education and healthcare in the state, three medical colleges will be functional at Mohali, Sangrur and Pathankot by the end of this year. In addition PGI Satellite center has started functioning at Bathinda while the other satellite center is coming-up in Firozpur," said Capt Amarinder Singh, while talking on the healthcare sector,

* Anubrata Biswas, MD and CEO, Airtel Payments Bank gave advice to improve the digital accessibility of banking system in the rural areas especially amongst the farmers so that the cash subsidies announced by the governments can directly reach to them. He announced that Airtel Payment Banks will be increasing the number of access points from 5000 to 50,000 in next one year and this will add more job opportunities to the youth of the state.

* Rahul Sharma, President, Amazon Web-services, India and South Asia propagated the idea to establish digital marketplace for the farmers where they can directly sell their produce online. He further advocated for increasing the accessibility of markets to MSME units of Punjab as they are the major backbone of the economy of the state. He also advised the state to use technologies like Machine Learning and Data Science to plug the revenue leakages in the state.

* Dr. Kiran Mazumdar Shaw, Executive Chairperson, Biocon said that Punjab has the unique opportunity to become the state having the best healthcare network in the country. This will also lead to generation of large number of medical and research based jobs. Punjab already has medical ecosystem with institutes like NIPER, IMTECH, PGI Chandigarh and with the current COVID-19 pandemic crisis there is an opportunity for the state to become role model in establishing Digital Healthcare System.

* Shantanu Jha, CHRO, Cognizant Technologies stressed on establishing Industry-Academia partnership to impart skill based training in the emerging areas of Data Analytics, Data Science and Machine Learning to the youth of Punjab so that their job prospects can be enhanced.

* Rajeev Talwar, MD DLF Developers gave the advice to work on establishing low cost rental housing model in the state and work towards increasing the urbanization of the state which can help in retaining the labor class in the state and prevent their migration which we have seen during lockdown.

* Sanjeev Mehta, Chairman and MD, Hindustan Unilever offered to start "Women Empowerment Program-Shakti" in Punjab which will generate employment for women of the state. He also advocated to digitize the fair price shops in the state which will help the government in plugging the loopholes in the system thus ensuring the subsided food reaching the right section of people.

* Ira Gupta, Head HR, Microsoft India encouraged to offer digital training and improving the skills of the faculty and students. She advised that the curriculum of the universities and institutions should be upgraded to include the learning of skills in the new technologies. Ira also propagated to enhance employment opportunities for especially abled persons so that they can remain motivated and contribute towards society building.

* Anand Deshpande, Founder Chairman and MD, Persistant Systems advised the government to establish Centre for Artificial Intelligence which can help in providing urban facilities to the persons in an efficient manner. He also advocated the government to take steps to stop migration of industry from Punjab.

* Rekhi Singh, Founder and CEO, R Systems International advocated to set-up IT Innovation hubs in Punjab as IT and ITES happens to major employer of youth. He also offered to join hands with Punjab Government to improve the mental health of the youth so as to prevent them from taking Drugs.

* Sameer Wadhawan, Senior Vice-President and Head HR, Samsung Electronics advised the government to set-up single window system for MSME sector and also to attract investment in agro-farm industry as Punjab is one of the largest producer of food grains in India.

This story is provided by PRNewswire. ANI will not be responsible in any way for the content of this article. (ANI/PRNewswire)