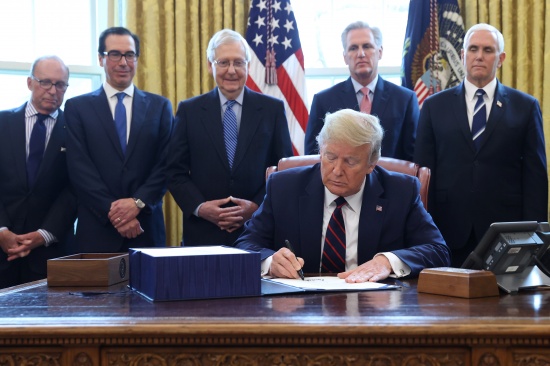 "WeChat, a messaging, social media, and electronic payment application owned by the Chinese company Tencent Holdings Ltd., reportedly has over one billion users worldwide, including users in the United States. Like TikTok, WeChat automatically captures vast swaths of information from its users. This data collection threatens to allow the Chinese Communist Party (CCP) access to Americans' personal and proprietary information," Trump said in a statement.

Citing reasons for the ban on WeChat, the US President said that the application captures the personal and proprietary information of Chinese nationals visiting the US, thereby providing the CCP a mechanism to keep tabs on the Chinese citizens who may be "enjoying the benefits of a free society for the first time in their lives".

"In March 2019, a researcher reportedly discovered a Chinese database containing billions of WeChat messages sent from users in not only China but also the United States, Taiwan, South Korea and Australia. WeChat, like TikTok, also reportedly censors content that the CCP deems politically sensitive and may also be used for disinformation campaigns that benefit the CCP. These risks have led other countries, including Australia and India, to begin restricting or banning the use of WeChat. The US must take aggressive action against the owner of WeChat to protect our national security," he added.

Earlier, Trump had issued an order banning TikTok as it "reportedly censors content that the CCP deems politically sensitive, such as content concerning protests in Hong Kong and China's treatment of Uighurs and other Muslim minorities. TikTok may also be used for disinformation campaigns that benefit the CCP."

US politicians have repeatedly criticised TikTok, owned by Beijing-based startup ByteDance, of being a threat to national security because of its ties to China.

The development comes as China and the US are at loggerheads on a variety of issues including Hong Kong national security law, the South China Sea, the novel coronavirus and trade.