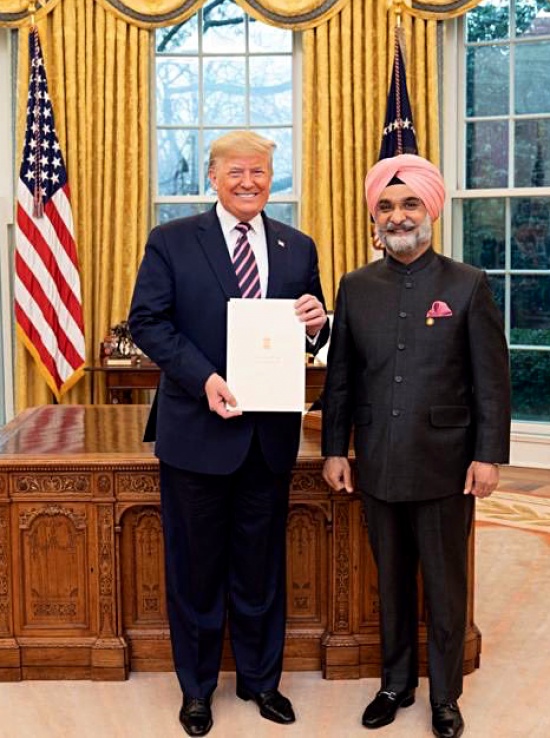 Washington DC , Aug 6: Indian Ambassador to the United States Taranjit Singh Sandhu on Wednesday local time said that the strength of the India-US strategic partnership would be central in the times ahead.

"The strength of India's strategic partnership with the United States will be central to the times ahead. Through the pandemic, we have worked together to maintain the integrity of our product supplies, under stress from shortages or dependency on single country sources," Sandhu wrote in the weekly US magazine Newsweek.

"As a responsible pharmaceutical manufacturer and stakeholder, we have kept open medical supply chains and made sure that essential medicines from India reached the U.S. and other partner countries," he added.

Sandhu further said that India "is witnessing" a "renewed interest" in India from the US digital and innovation giants--in the last three months.

"More than $40 billion has been pledged as investments that will spur economic growth and create jobs in both countries, leveraging our complementarities for mutual benefit. Those are not stand-alone events from biotechnology to artificial intelligence, defence to renewable energy, fighting against terrorism to cooperation in the Indo-Pacific, there is no area of human endeavour that has not benefited from our binational cooperation," he further wrote.

The Indian envoy to the US further said that the Indian companies would play an important role in public health and outreach worldwide due to its "expertise and capabilities in manufacturing and vaccine delivery".

"Indian companies with expertise and capabilities in manufacturing and vaccine delivery will step up to the plate and play an important role in public health outreach across the world, including in Africa and Latin America," he wrote further.

Speaking on the developments in Jammu and Kashmir post the abrogation of Article 370 in August last year, he said, "No longer does Jammu and Kashmir remain sequestered from the many constitutional rights, democratic privileges and empowering legislations--including gender and child-friendly laws--that had progressively been rolled out, over decades, in the rest of India."