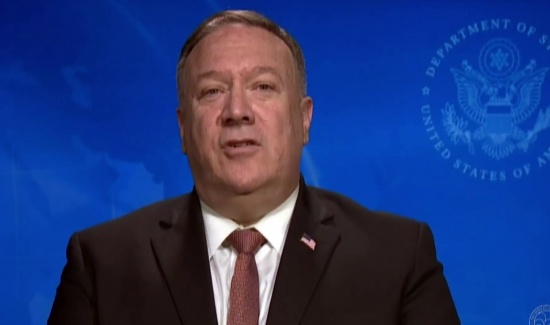 Washington , Aug 5: US condemns the Chinese Communist Party's attempt to prosecute pro-democracy advocates resident outside of China, Secretary of State, Mike Pompeo said on Tuesday (local time) amid concerns over the imposition of controversial national security law in Hong Kong.

"The United States condemns the Chinese Communist Party's attempt to prosecute pro-democracy advocates resident outside of China, including in the United States. We stand on the side of freedom," Pompeo said in a tweet.

In a statement, Pompeo said the Chinese Communist Party cannot tolerate the free thinking of its own people, and increasingly is trying to extend its reach outside China's borders.

"In the latest example, Chinese authorities have reportedly issued arrest warrants for six pro-democracy advocates resident outside of China, including a US citizen. The United States and other free nations will continue to protect our peoples from the long arm of Beijing's authoritarianism," US Secretary of State said.

The draconian law is aimed at crushing dissent in the erstwhile British colony which saw massive pro-democracy protests last year.

The legislation, which came into effect ahead of July 1 punishes what Beijing terms secession, subversion, terrorism and foreign interference with up to life in prison.

US-based Samuel Chu of the Hong Kong Democracy Council (HKDC) and Wayne Chan Ka-kui, previously reported to be in Amsterdam were also listed out as suspects.