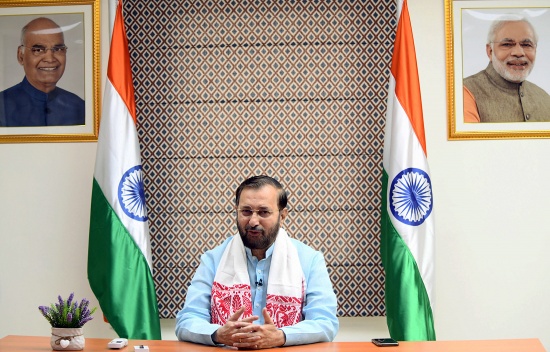 Guwahati, Aug 5 : A 24-hour channel -- Doordarshan Assam -- dedicated to the northeastern state, was launched on Tuesday by Union Minister for Information and Broadcasting Prakash Javadekar.

Calling the channel "a gift to people of Assam", the Minister said it will cater to all sections of the people of Assam, and will also be immensely popular. He said it is important that all states have their own Doordarshan channel.

Reiterating Prime Minister Narendra Modi's vision of turning northeast into India's growth engine, the Minister said that the region has immense natural and human resource potential, and the connectivity has been improving steadily.

The Doordarshan channel in Assam is part of a never-before focus on northeast under the current Government, the Union Minister said via video conferencing from the national capital.

Calling it a significant day for the people of Assam, the Union Minister said "This channel would boost the growth of Assam in all spheres of human activities, while at the same time help percolate the initiatives and programmes of the Government to grassroots."

Assam Chief Minister Sarbananda Sonowal, who joined the occasion from state capital Dispur, acknowledged Modi's commitment, saying "PM Modi, from day one, has been sincerely trying to focus on the true potential and possibilities of the northeast."

Assam Governor Jagdish Mukhi said, "it is a happy moment for all of us in Assam because the public broadcaster is adding a feather to its kitty with the launch of DD Assam".

Information and Broadcasting Ministry Secretary Amit Khare, who was present at the Doordarshan Kendra in New Delhi, said that since the launch of "DD Arun Prabha" by the Prime Minister last year, the Ministry was discussing the conversion of DD North East to a new channel exclusively for Assam.

"The state can be a great link between India and ASEAN. I am sure DD Assam will provide a new platform for the emerging talent of the region and bring the rest of India closer to north-east and also make the talent of north-east to all of India," the Iiamp;B Ministry Secretary said.

He said DD Assam would also be contributing in a major way to the educational development of the state like other regional channels and it will be another milestone in the government's effort to provide online education in regional languages across states.