Ram Mandir likely to usher in prosperity in Ayodhya 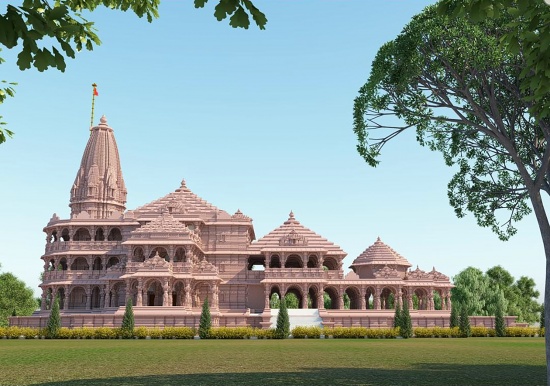 Ayodhya, Aug 5 : With Ayodhya all decked up in lights, colours and sounds of bhajans for the 'bhumi pujan' ceremony of a grand Ram Temple by Prime Minister Narendra Modi on Wednesday, many in this temple town are waiting eagerly for the auspicious occasion to herald in an era of prosperity with new employment opportunities and boost to tourism after years of interlude.

The longest title dispute in the country, which began in 1885 ended with Supreme Court giving its verdict in November last year. Residents here are waiting impatiently for the temple to come up.

"Now the Ayodhya residents are hopeful their (Lord) Ram will bring in possible avenues of jobs and other opportunities as well," feel Ishtiaaq, a trader.

He said "For many years political parties here have always drawn a line in the name of communities and religious institutions, but one thing that has always existed is the brotherhood.

"Now, with the construction of the Ram Temple, employment opportunities will gain momentum. People are also eager to catch a glimpse of the Prime Minister in Ayodhya."

Lilavati, another resident of this town in Uttar Pradesh, said, "The coronavirus pandemic has marred the festive fervour, but still I am happy that we have overcome all the battles and are now here today."

Krishnakumar, another resident said "The battle that has tarnished the reputation of Ayodhya has finally ended."

A devotee Rajesh said that even though the dispute lasted for five centuries the land of "Maryada Purushottam" never lost hope.

After a protracted legal battle, the Supreme Court on November 9, 2019 paved the way for the construction of the Ram Temple by a trust at the the disputed site in Ayodhya, and directed the Centre to allot an alternative five-acre plot to the Sunni Waqf Board for building a new Mosque at a "prominent" place in the holy town.

Ram Mandir likely to usher in prosperity in Ayodhya